Chairman of Ouran Academy and President of Suoh Enterprises

Ep 04 - Attack of the Lady Manager! (mentioned only)

Takeshi Masu
Yuzuru Suoh (須王 譲, Suō Yuzuru) is Tamaki Suoh's father, the patriarch of the Suoh family and the Chairman of the Board for Ouran Academy.

Yuzuru's innate nature is pleasant and charming, which are traits he shares with his son, Tamaki. He is an intelligent, caring and hard-working individual who cares deeply for the people in his life whom he loves. He is content to work within the boundaries of his class and position to secure what he deems important to himself on a personal level. This is shown when he assists the de Grantaines restore their business and take over Suoh Enterprises without his mother, Shizue Suoh, knowing until it is inevitable.

Yuzuru has light brown hair and brown eyes. His height is average for a Japanese man. Perhaps because of Tamaki's hafu status, there is little resemblance between father and son, as observed by Haruhi in Ep 25 - The Host Club Declares Dissolution!  Yuzuru is always seen wearing light-colored suits (which is contrary to typical Japanese business-wear), whether at Ouran as Chairman, at his various business ventures and even in private at the Suoh mansion. This fact evidences his gentility and noble-birth with a flair for the dramatic (another trait he shares with his son.)

Despite knowing of his mother's loathing of Tamaki, he chooses to stay in the background, anticipating that his mother and his son might be able to work out their differences without his intervention.  To date, his only act of rebellion against his mother's wishes seems to be that he maintained his relationship (albeit discreetly) with Tamaki's mother, but divorced the woman his mother forced him into marrying. In the anime, he appears to be somewhat cool and formal with his son in his public, though his office desk holds photographs of Tamaki and Anne-Sophie at different stages of life.  Interestingly, Tamaki grows quite serious in Yuzuru's presence. The manga is a little different, however, showing Yuzuru as eager to tease his son at every opportunity and displaying warmth and affection as a caring father.

It's revealed in volume nine of the manga, that Yuzuru knows where Anne-Sophie is; it wouldn't have been hard for him to arrange for a reunion. What Yuzuru plans secretly is to have Tamaki surpass him in terms of capabilities, so that Tamaki may inherit the Suoh empire and force his grandmother to accept both Tamaki and Anne-Sophie, in time. Ironically, it is Tamaki who eventually wins over Shizue's heart and opens his path to succession.

Yuzuru's kind-heartedness is seen when he kisses Tamaki on the forehead, in a manga chapter, prompting the teen to do the same to Haruhi as a "paternal" gesture when she's not feeling well and pushing their relationship into new territory. In Ep 26 - This is Our Ouran Fair!, while the Host Club is enjoying the last night of the festival, Yoshio Ootori recounts to Yuzuru how Kyoya Ootori outsmarted both the Tonnerre Group and himself. Yuzuru suggests that they be friendly, as their sons are and Yoshio agrees. However, upon hearing that Yoshio has an interest in having Kyoya and Haruhi engage to be married, Yuzuru recants saying,"That's the one thing I could never allow," hinting that he is planning the same thing for Tamaki.

Anne-Sophie de Grantaine is Yuzuru's lover and eventual spouse. Yuzuru meets Anne-Sophie while on a business trip in Paris. They soon fall in love and have a child together, Tamaki.  Shizue, upset with her son's irresponsiblity while already married,  objects to Yuzuru's plan to bring Anne-Sophie and Tamaki to Japan.

In the manga, it is shown that Yuzuru visits Anne-Sophie and Tamaki in France from time to time and that he is a loving father to Tamaki. It is revealed in Volume 09 of the manga that Yuzuru knows where Anne-Sophie is located, but keeps this information to himself in the hopes that Shizue and Tamaki might develop a decent relationship as he is prepared to inherit the Suoh empire.

With the help of the The Ootori Group's medical influence, a treatment for Anne-Sophie's illness is developed and Yuzuru brings her to Japan for a brief visit during which Yuzuru, Anne-Sophie and Tamaki are briefly reunited. Yuzuru's master plan is to restore the de Grantaine business, to force his mother into retirement, to take over as President of Suou Enterprises and to make Tamaki his legitimate heir by marrying his true love, Anne-Sophie.

Tamaki is Yuzuru's only child. Despite Yuzuru being the school's chairman, he enjoys teasing Tamaki and considers it a hobby. Yuzuru truly cares for his son, an example of which is seen when Tamaki first arrives in Japan.  Yuzuru cosplays as a ninja to make Tamaki still believe that "ninjas" are real, just as he told him they were when Tamaki lived in France. It is also revealed in the manga that Yuzuru allows his mother's "deal" with Anne-Sophie as part of his ultimate plan to have Tamaki take over Suoh Enterprises and for himself to finally marry Anne-Sophie.  He approves of Haruhi Fujioka and states in both the manga and anime that he wants Tamaki to marry her in the future.

Yuzuru's relationship with his mother is quite formal and appears to be more of an employer-employee nature than one of mother-son.  It may be speculated that this is based upon the fact that when Yuzuru's father died, Shizue picked a spouse for Yuzuru (who was in high school at the time) and established him as the Suoh patriarch. When Yuzuru is older and sent to Paris on a business trip, he falls in love for the first time with Anne-Sophie de Grantaine, with whom he has a child.

His mother's anger causes her to forbid mother and baby from returning to Japan and to disallow communication between Yuzuru and his "other family." Eventually, Yuzuru divorces his wife, who is discovered to be unfaithful, and to continue visiting his paramour and son in secret, hoping to eventually marry Anne-Sophie and legitimize Tamaki.  The issue is brought to a head when Shizue realizes that a future Suoh heir is not forthcoming and so, turns to Tamaki as a viable possibility.  She offers Anne-Sophie financial security if irrevocable guardianship of Tamaki is turned over to her. Anne-Sophie, at Tamaki's urging for his mother's sake, agrees.

Yoshio already knows Yuzuru when he asks Kyoya to befriend Yuzuru's son, Tamaki, in order to foster a good relationship between the two mega-enterprises and their elite families. At the conclusion of the anime, Yuzuru and Yoshio state that they might become friendly on a personal level until Yoshio shows interest in arranging an engagement between Kyoya and Haruhi, at which point Yuzuru objects because he has similar plans for Tamaki.

In the manga, it's revealed that Yoshio made a top-secret deal with Yuzuru, who funded the development of a cure for  Anne-Sophie's illness, Systemic lupus erythematosus.  In return for using his medical authority to keep the project hidden from the public and Shizue, Ootori Medical has full rights over the Japanese distribution of the groundbreaking drug.

Once they meet, Ryouji and Yuzuru become friendly and remain on good terms.  In an omake of the manga, the two fathers are seen planning to prank Tamaki while he prepares to ask Ryouji for Haruhi's hand in marriage, their similar desire to tease the young man endlessly evident. 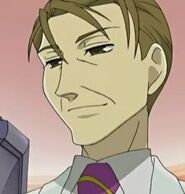