Yoshio Ootori (鳳 敬雄 Ōtori Yoshio) is Kyoya Ootori's father and the patriarch of the Ootori family.  He is the CEO of The Ootori Group, a highly successful medical and health care zeibatsu.  He manages his business with an iron fist and his family in the same manner.

Yoshio is portrayed as a cold, calculating father. Kyoya tries hard to please him, despite the fact that his father has set impossible standards for him to meet. Yoshio shows no understanding for his children and has already planned out the lives of his sons as his own successors. In the manga, he acknowledges Kyoya as a possible successor despite being the third son. In the anime, he states he had already decided Kyoya would inherit Ootori Medical from him, only to have the Tonnerre Group attempt a hostile takeover followed that is thwarted by an anonymous investor. Said investor turns out to be Kyoya, who purchases the company and returns it to his father, anonymously.

In the anime, he expresses an interest in Haruhi Fujioka as a possible bride for Kyoya.  However, in the manga, Kyoya states that he would not marry Haruhi because she would not bring sufficient merit to the Ootori family. It is interesting to note that in the manga, Yoshio does not slap Kyoya at the school fair and is fully aware of Kyoya's involvement in the Host Club.

Although his youngest son tries hard to please him, Yoshio acts in a callous and uncompromising manner towards him, even going as far as to slap his son in public when he learns of Kyoya's role as Director of the Host Club, which he deems frivolous. His need to control all aspects of his life extends to his four children, whose futures he maps out according to his own whims.

The matter of Kyoya's future as the heir apparent is not established by Bisco Hatori, who felt it was always a future matter; however, it it implied to be a possibility in the manga. In the anime, Yoshio is both shocked and amused when he learns of Kyoya's involvement in preventing the hostile take-over of Ootori Medical by the Tonnerre family, and the subsequent and anonymous return of the company to him by someone with the initials  K.O. (both Kyoya's initials and a play on the phrase "Knock-Out"). Yoshio also states, in the anime, that Haruhi would make a good wife for his son and that Tamaki is also a positive influence on Kyoya. It should be noted that he is the business partner of Renge's father.

Yoshio already knows Yuzuru when he asks Kyoya to befriend Yuzuru's son, Tamaki Suoh, in order to foster a good relationship between the two mega-enterprises and their elite families. At the conclusion of the anime, Yuzuru and Yoshio state that they might become friendly on a personal level until Yoshio shows interest in arranging an engagement between Kyoya and Haruhi, at which point Yuzuru objects because he has similar plans for Tamaki.

In the manga, it's revealed that Yoshio made a top-secret deal with Yuzuru, who funded the development of a cure for Anne-Sophie de Grantaine's illness, Systemic lupus erythematosus. In return for using his medical authority to keep the project hidden from the public (and Shizue Suoh, Tamaki's grandmother), Ootori Medical has full rights over the Japanese distribution of this groundbreaking pharmaceutical. 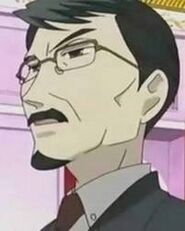 Retrieved from "https://ouran.fandom.com/wiki/Yoshio_Ootori?oldid=39812"
Community content is available under CC-BY-SA unless otherwise noted.