Yasuchika "Chika" Haninozuka is Honey's younger brother.  He is also the present Captain of Ouran's Karate Club, having taken on the mantle following Honey's abdication of the title in order to join the Ouran Host Club.

In contrast to his older sibling, Chika hates sweets, looks older, and is taller than Honey, whom he addresses as Mitsukuni. He dislikes his brother for eating sweets and playing with "cute" things because he believes this demonstrates weakness. Yet, despite claiming to hate his older brother, they do share some personality traits, though Chika tries to hide it. In the manga it's shown that he cries a lot and loves cute/small animals, though the animals must be real. For example, when Mori has a baby chick in his care, Chika claims not to care, but then immediately starts making excuses to go to Mori's house to see it.  Mori sees through Chika's indifferent attitude and asks him to hold the fuzzy animal. It is also shown in the manga that Chika joins the Animal Breeding Club started by Satoshi Morinozuka, although he states, "I'm only here because you can't look after all these animals by yourself." Their club becomes popular because of the high demand for cute animals by the girls at school.  His favorite food is shrimp, but Satoshi always steals it from his plate.  He calls his older cousin Mori, "Taka-nii".

Chika is described as looking identical to Honey in facial features with golden-brown hair and light brown eyes.  He's taller than his older brother and wears glasses; and though he's very strong, Honey is the stronger of the two brothers.[2]

Like all the Haninozukas, Chika is skilled in both karate and judo. He becomes the head of the Karate Club after Honey leaves to join the Host Club.  Whenever the siblings encounter one another, they must fight according to the family tradition, which is said to teach a person to always have their guard up.  Honey has always been the victor in these exchanges, but uses the opportunity to help Chika develop new skills and to gain experience. Because of his intense feelings, Chika wears fake glasses saying, "They create a glare so I can't see him, which means I won't have the urge to attack him."  It may also be due to Chika's desire to appear different than Honey, since their facial features are quite similar. It is later revealed in the manga that he stops wearing them when he attends high school.

In the anime episode, Ep 18 - Chika's "Down with Honey" Declaration! Chika comes to Music Room #3 to tell Honey to stay away from him.  Later in the same episode, he tells the hosts that he considers Honey an "alien," going on to say that Usa-chan must be a communication device between Honey and an alien mother ship, an idea that begins when Chika learns that Honey consumes three whole cakes for dessert every night and hosts "Special Cake Night," an all-you-can-eat midnight cakefest once a week, yet never gains an ounce of weight or becomes ill.

Honey is Chika's older brother and is about as different from his as day is to night. While both look alike, as noted by Haruhi upon first seeing the two together, Honey is much more cute and loli-shota than his younger brother. While Chika values discipline and dedication, concepts driven in by the Haninozuka clan, Honey is extremely carefree and indulgent. Honey is universally more loved than Chika, and this leads to a deep split between the two brothers. Chika is shown to feel inferior to his older brother, and underestimated by everyone. Also, Chika desperately wants to beat Honey in a fight, and this leads to their sibling rivalry. Nevertheless, they were once close and still have some (if not very little) brotherly feelings for each other.

Mori's younger brother and Chika's cousin, featured only in the manga. He acts as Chika's caretaker in a similar way that Mori cares for Honey. However, Satoshi loses his temper quickly with Chika and often resorts to violence to correct his behavior. The two are rarely pictured apart. 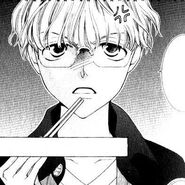 Tough on the outside... 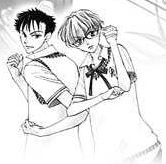 Martial Arts with Satoshi
Add a photo to this gallery

Retrieved from "https://ouran.fandom.com/wiki/Yasuchika_%22Chika%22_Haninozuka?oldid=39314"
Community content is available under CC-BY-SA unless otherwise noted.