Umehito Nekozawa (猫澤 梅人 Nekozawa Umehito), commonly referred to simply as Nekozawa-senpai, is the president of the Black Magic Club. Depicted as a hooded figure who is never without Beelzenef, the curse doll, which is actually no more than a hand puppet that looks like a cat. Despite displaying a frightening disposition and strange hobbies, Nekozawa is actually a very nice person. He suffers from photophobia, which causes him to collapse in direct sunlight. As a result, whenever he is dragged towards any light source, he refers to the people who do so as "murderers." Nekozawa is devoted to his little sister, Kirimi Nekozawa. So much so, in fact, that he asks the Host Club to help him become the "princely-big brother" Kirimi wishes him to be. He is of Russian descent from the Tokarev Dynasty whose wealth comes from the sale of firearms.

As the president of the Black Magic Club, Nekozawa attempts to get people to join by offering a free "Beelzenef" hand puppet upon admission, but he ultimately fails in this endeavor. Apart from the hand puppet, he also sells cursed voodoo doll versions of Beelzenef which are claimed to bring a shower of misfortune to the person whose name is written on its back. Tamaki Suoh is shown to be quite superstitious and nervous around Nekozawa as he has allegedly experienced malintended events after stepping on Beelzenef.

Beneath the black wig and hooded cape worn over his Ouran uniform, Nekozawa has a pleasing appearance -- neck-length pale blonde hair that has bangs swept to the left and blue eyes. When not wearing the dark garb, he actually resembles Tamaki, which is the primary reason Kirimi mistakes Tamaki for her big brother when the girl first encounters him. In the manga, it's seen that while at college, he adopts casual clothing but still wears a black hoodie on top of it and continues to cover his hair with a black wig and dark contacts that cover his blue eyes.

Even though Nekozawa first appears to be a strange and scary person obsessed with the occult and Black Magic, he is revealed to be a sweet guy who simply doesn't know how to interact properly with people. His devotion to his family (especially Kirimi) is seen when he submits to a Renge-led transformation, during which he displays intensity and purposefulness in challenging his photophobia to save Kirimi from a gigantic white cat who is approaching her in one of Ouran's gardens.

When Tamaki comforts Kirimi at one point, Nekozawa seems jealous of their rapport. This spurs him to overcome his phobias and win her over. However, his photophobia makes him quite nervous when it comes to light of any kind. He is terrified of sunlight and usually starts panting and sweating before passing out when directly exposed to it.

Despite all this, he is a fan of the Host Club.

Nekozawa's actual appearance is as alluring as any of the Hosts; however, due to his severe photophobia, he must wear these dark items. Due to his inability to show his natural appearance, Kirimi fails to recognize him as her big brother. In addition, the siblings' conflicting opinions about darkness and animals (Nekozawa loves both, while Kirimi hates both) prohibits them from being around one another.

When Kirimi wrongly concludes that Tamaki is her elder brother, it is the Host Club who comforts the broken-hearted occultist and Renge Houshakuji who puts him through a vigorous re-training to accustom him to the light and be closer to his sister. Though he manages to withstand a flashlight beamed into his face, he frightens Kirimi with the strange way it alters his appearance.  She runs out of the room crying while Nekozawa falls to his knees and begs for her to come back. Feeling torn apart decides to give up and let Tamaki take his place as her brother. Though Tamaki declines and says he should not give up. Though he later overcomes his aversion to the light temporarily in order to rescue Kirimi from a stray cat, he collapses straight afterwards and relapses into his dark-loving nature; still, his heroism does not go unnoticed by his sister who ends up accepting him for who he is and, eventually, becomes an occultist and Black Magic Club member herself.

Nekozawa plays a larger role in the manga, as well as in the dorama, to the extent that he is sometimes thought of as the "8th Host." At end of Volume 08 of the manga, Kirimi becomes a darkness-loving occultist herself, complete with her own black hood and a stuffed cat instead of a Beelzenef puppet. In Volume 03 of the manga, the Host Club actually stays at the Nekozawas' beach estate, not the Ootoris', and the reason that Umehito does not attend their dinner is because when Haruhi Fujioka switches the lights on indoors, he goes into shock and is incapacitated. When Haruhi becomes ill and the hosts escort her to the bathroom, all the hosts (but Tamaki) see the photophobic male without his cloak and wig. It is unclear if Nekozawa figures out Haruhi's true gender during the Host Club's stay in his mansion since Haruhi's cross-dressing father had replaced her masculine clothing with feminine clothing. And finally, in Volume 18 of the manga, it is Nekozawa and a fellow Black Magic Club member named Reiko Kanazuki who create distractions at the airport to keep Anne-Sophie de Grantaine from boarding the plane, so Tamaki might see her, if only for a few minutes; and despite originally being afraid of him, Tamaki cries when Nekozawa graduates and he goes on to study literature at Ouran University.

Kirimi is Nekozawa's younger sister initially fears him. In the manga, she views him as a ghost and in the anime, a monster. This, despite the family portrait and photos that depict him as he truly appears. Her rejection causes him to be heartbroken and obsessed with securing her love and affection. The Host Club helps him achieve this goal and the two gain one another's trust and friendship. Kirimi later becomes an occultist much to Nekozawa's delight.

Initially, Tamaki is afraid of Nekozawa, believing him to be twisted and dangerous. Once learning of Nekozawa's family woes, however, he sees it as his duty to reunite the siblings. Through this, they develop a polite, if cool, friendship. On Halloween, as part of a prank on the younger students, Nekozawa chooses Tamaki to dress up as the Clocktower Witch who terrifies Team B (consisting of Hikaru, Kaoru, Haruhi and Kazukiyo). Although Nekozawa likes to scare Tamaki, he also wants to "deepen" their relationship, implying that Nekozawa harbors feelings for him. In Chapter 71, as Nekozawa is graduating, Tamaki realizes how much he is going to miss him. The two boys cry together.

Kuretake is the Nekozawa families maid and servant who helps him during the Halloween scaring competition and is shown to be loyal to her master. Like Nekozawa, Kuretake is quite dramatic.

Kadomatsu is Nekozawa's personal butler. He is often shown with Kuretake whenever they assist Nekozawa. He, along with Kuretake, helps Nekozawa during the Halloween Frightfest. On a personal level, he is shown to be sympathetic and loyal towards his master.

In Nekozawa's Gothic Black Magic Club, Reiko seems to be Nekozawa's right hand. She often helps Nekozawa plan events and rituals and, like her president, is fascinated with Black Magic and the occult. In one story, however, she follows a personal agenda in trying to curse Honey's heart in order to make him fall in love with her.

The twins seem to dislike him and torment him by shining flashlights in his face. When Nekozawa admits that he pleads with the Dark Gods for Kirimi to come to the Darkness, they're curious and ask about his intentions towards her. Later, they later congratulate him with party poppers when he withstands the flashlight's "evil beam" and even buy a curse doll from him which they use in Ep 11 - Big Brother is a Prince.

When Tamaki decides to help him unite with his little sister, Kirimi, he gets Renge to help. As part of the Host Club's "Special Training Program" she acts like a drill sergeant and scolds him harshly when he fails his training. When she asks him if he's ready to change, he breaks out in a sweat and begs her to stop because he's not ready. She deliberately shines the flashlight in his face and criticizes his Black Magic garb. The Hitachiin twins point out that she also sometimes wears outlandish cosplay outfits. When Nekozawa ultimately rescues Kirimi, Renge takes credit and remarks, "This is all thanks to my special training."

In the dorama, Renge only briefly encounters Nekozawa, but admits that he is quite handsome. Flattered and surprised, he leans towards her and asks her to repeat herself. When she pulls off his hood to see him better, he grows angry as it exposes him to light. He vows that "doing such a scary thing shall get her cursed."

Nekozawa doesn't interact with Haruhi often and when he visits the Host Club, Tamaki warns her to steer clear. When Haruhi mistakenly calls Kirimi "sashmi," Nekozawa instantly corrects her. In the dorama, however, he is seen interacting with Haruhi several times. When Kirimi runs away, she grabs his arm and tells him to go after her. He sadly says that she may be better off without him. Haruhi is sympathetic, calling his name softly. In another dorama episode, he plays fortune teller and remarks that Hikaru's girlfriend looks like Haruhi. And in the final dorama episode, as Haruhi is running tell Tamaki that the Host Club needs him, she falls and it is Nekozawa who helps her to her feet.

In the manga, Nekozawa seems interested in Reiko Kanazuki's scheme to make Honey fall in love with her, observing events as they unfold. In the anime, Honey is unafraid of Nekozawa and, in fact, has sympathy for him when he learns of the boy's family woes. He even offers to draw the curtains of the salon in order to darken the room when Nekozawa is in distress from the sunlight streaming through the windows. In the dorama, he compliments Nekozawa as being handsome. And when Honey is kidnapped by the Newspaper Club, it is Nekozawa who foresees it in a crystal ball and tells Takashi Morinozuka (aka Mori) so that he may save Honey.

Nekozawa attempts to convince Kirimi that he is her brother 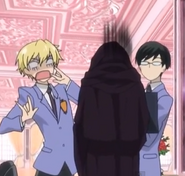 Nekozawa's true face emerges from the dark room he normally hides in...

The Nekozawa siblings are happily reunited

...and Nekozawa promptly regresses in age, thanks to the mushroom

At University, Nekozawa opts for black hoodie and jeans.

Umehito in the Volume 18 extras. 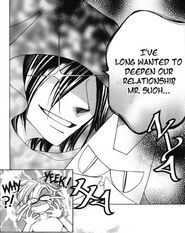 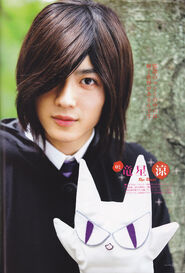 In the DS game, Kyoya is unfazed by Nekozawa.

Nekozawa in the DS game
Add a photo to this gallery

Retrieved from "https://ouran.fandom.com/wiki/Umehito_Nekozawa?oldid=39683"
Community content is available under CC-BY-SA unless otherwise noted.