Takeshi Kuze is captain of the American Football Club. He has a lifelong grudge against Kyoya and is obsessive about beating him at anything one day. He is engaged to and in love with Kanan Matsuyama. His family owns the largest produce importation business in Japan.

Kuze is most often shown in his football uniform but can be seen in his Ouran blazer or casual clothes on a few occasions. When the kind yet unattractive student council president fails to meet Renge's expectations of a handsome and evil rival for the Host Club, Kuze's physical appearance proves to closely match her imaginary villain's. His long, straight nose is a unique feature of his character design. Bisco Hatori jokingly stated that he is "king of the bottom eyelashes" and also pointed out that his haircut looks similar to the twins' when they do not have it gelled up.

Kuze has had a long-standing feud with Kyoya ever since Kindergarten when Kuze was showing off his knowledge of oranges, his family being influential in the citrus fruit industry.  As he tells a group of students that even the orange peels are nutritious, he hands one to Kyoya who warns that the skins might be covered in pesticides. Kuze quickly tries to insist that they are not covered in pesticides since they're from his family's company, but no one listens to him as Kyoya is now confidently explaining the other benefits of oranges and all of the girls are commenting on how cool Kyoya is. Kyoya turns smiling to Kuze and says "Kuze surely knew all that. Right? I hope I didn't talk out of turn." Kuze is very insulted by this and later says, "He not only knifed my sweet 6-year-old-heart, he salted the wound!!" which prompts the other members of the Football Club to give him an orange to calm him down.

Kanan and Kuze are childhood friends.  They are engaged and have been in love for years.  Her family owns the second largest produce importation company in Japan.  Kanan thinks Kuze is simple-minded and foolish, but also says that's what makes him cute.  She tries to stop Kuze from constantly challenging Kyoya because she knows he'll lose every time.  She also likes to tease him and can be very harsh, but according to Bisco Hatori, the two are very "lovey-dovey". 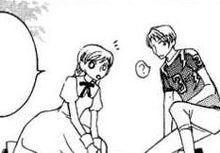 Takeshi with his fiance

The twins and Tamaki confront Kuze and friends. 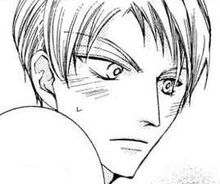 Takeshi with his American Football teammates. 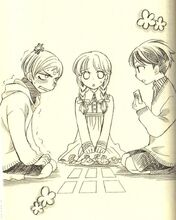 Young Kuze and Kyoya compete at cards.
Add a photo to this gallery
Retrieved from "https://ouran.fandom.com/wiki/Takeshi_Kuze?oldid=36771"
Community content is available under CC-BY-SA unless otherwise noted.