Ep 06 - The Grade School Host is the Naughty Type!

Shiro Takaoji is an unofficial Host of the Ouran Host Club, as designated by Tamaki after taking the 5th-grade student under his tutelage.

Being quite spoiled, Shiro tends to do whatever he wants, but is shown to be most impassioned and unstoppable when he's desperate, as seen when he goes to the Host Club and begs Tamaki to teach him how to make girls happy.  Shiro has no filters and is  unremorseful about the way his insults hurt others, as seen when he points out that one of Tamaki's guests, Tsubaki Kamigamo, looks like a carp because of her "fish lips."  He also negatively remarks on the Hitachiins' twincest, Honey's loli-shota ways and Haruhi's cross-dressing.  Despite his stubborness, Shiro agrees to Renge's make-over just to get Tamaki's help in wooing his 5th-year grademate, Hina Kamishiro.  Although Shiro walks out on the Host Club in exasperation, Tamaki comes through and helps him win the heart of his crush, as well as his respect for the Host Club.

Shiro is normally seen wearing the male Ouran Academy grade school uniform. He has blue eyes with brown hair, a fair complexion and is of average height for his age.

Shiro is in love with a girl in his grade named Hina Kamashiro, who is moving away to Germany.  He comes to Music Room #3 in order to ask Tamaki Suoh for help in learning how to make girls happy.  Tamaki learns that Shiro is supposed to play a piano duet with Hina but, instead of practicing with her, he prefers just to watch her and listen to her play.  Tamaki reveals his expertise at piano and teaches Shiro his part of the four-hand piece in order for him to play it with Hina before she leaves Japan.  Hina is invited to a command performance and the young couple "make music together."  They end up corresponding through e-mail, though Shiro describes Hina as quite jealous.

In the manga, Shiro is "loaned" to Kasanoda in the attempt to make Kasanoda cuter by serving as his "lovely item," just as Honey serves as Mori's "lovely item."  He also appears in the last chapters of the manga, complaining that Tamaki hadn't taken him to an amusement park yet.  He makes a cameo appearance in Ep 13 - Haruhi in Wonderland! as a mouse.

In Ep 06 - The Grade School Host is the Naughty Type! Shiro manipulates Tamaki into helping him learn how to win a girl's heart by calling the vain host "king" and "genius."  In the process, the hosts discover that Shiro only wanted to make one girl happy, his crush Hina Kamishiro.  Because of that, throughout the following days, Tamaki tutors Shiro on how to play piano because it seems that Hina wanted nothing more than to play the piano with Shiro. Tamaki and the rest of the host club arrange a recital for them to both play together, which give Hina and Shiro a chance to interact with each other properly.

Hina Kamishiro is Shiro's crush. Shiro admires Hina's ability to play the piano so beautifully and he enjoys listening to her music rather than playing the piano with her. When Shiro asks for help from the Host Club, the Host Club realizes that Shiro only wanted to make Hina happy since she's moving to Germany after a week, so they arranged a piano recital for them two which made them talk to each other properly. Shiro and Hina seems to be in the Music Club, as hinted by Hina when she asks Shiro if he already practiced the new music sheet the teacher gave to them. In the end of the episode 6, Shiro says to the guests that "his girlfriend might be jealous" , which might means Hina became Shiro's girlfriend, Shiro also mentions that he and Hina are sending mails to each other everyday. 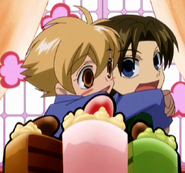 Retrieved from "https://ouran.fandom.com/wiki/Shiro_Takaoji?oldid=39308"
Community content is available under CC-BY-SA unless otherwise noted.