Ouran Academy (also known as Ouran Elite Private Academy)  is a prestigious private school located in Bunkyō, Tokyo, Japan. The school is attended primarily by children of the rich and famous (e.g. children of prominent families, business magnates, politicians, celebrities, etc.). Haruhi Fujioka is from a middle-class family which, to students accustomed to wealth, makes her seem poor in comparison. Ouran Academy houses five different divisions: Pre-school/Kindergarten, Elementary School, Middle School, High School and College/University. Although these four divisions are all located on the same campus and students are free to move about, they tend to remain near the area of their classes.

Ouran Academy is also widely known by its students as being the home of the Ouran Host Club, an enormously popular and influential club located in Music Room 3 of the High School building.

This mantra permeates Ouran with students of stellar family backgrounds given entrance priority over those from families of lower social or economic status, regardless of academic ability.  All students at the school, however, are expected to be academically proficient and possessing leadership potential.  The school accepts international students who meet criteria and offers a full scholarship to one Japanese student each year (per grade level at the high school) who meets the cut score on a notoriously difficult entrance exam, guaranteeing that they will enter Class A upon admission, where they are expected to be Top of the Class each trimester in order to remain enrolled at Ouran.

At Ouran Academy, students are separated into four classes based on their family's wealth, lineage, influence and their personal intelligence. Basically the Ouran Academy decides their student's classes into their family's pedigree and grades. For example, the Host Club members are all in the A class for their year group, where the students from highly privileged families are placed. The only exception is Haruhi, who gets a special privilege due to her scholarship status.

The order of classes are as followed:

As the series focuses more on the school's extra-curricular activities, the actual subjects taught at Ouran and the structure of the school day are not directly shown in the anime, nor are any teachers revealed; however, the manga directly reveals two specific classes offered at the academy: Phys Ed and Greek. Additionally, some of the subjects referenced in both media include French, German, Greek, Geography, English, Science, Physics, Chemistry, Math, Japanese History and Modern Literature.

Many of the buildings on school grounds were inspired by famous monuments which include Buckingham Palace, Place de la Concorde and St. Peter's Basilica. In addition, a large portion of the academy's architecture is reminiscent of mid-nineteenth century Paris, France (where the Houshakuji family lives).  And it's no accident that most of Ouran's anime architecture is shaded pink with lavender overtones.  Pink is the favored color of flirts and teases.  The Ouran Host Club does nothing but and their guests, while intrigued, are basically naive and unaware of life's more mature physicality.  Lavender is the milder version of purple which bespeaks sophistication and a focus on one's own advancement and, after all, those who attend Ouran Academy are all about moving up in the world. 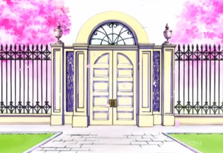 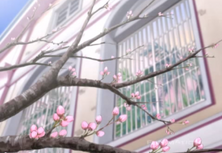 The school year begins in April...
Add a photo to this gallery

Retrieved from "https://ouran.fandom.com/wiki/Ouran_Academy?oldid=41026"
Community content is available under CC-BY-SA unless otherwise noted.