Nana Seino
Momoka Kurakano is one of Haruhi Fujioka's fangirls and one of the three girls always shown in Haruhi's group. She is in Class 1-A, the same class with Haruhi, the Hitachiin twins and Renge Houshakuji and she is also class Vice-president..

Momoka has long brown hair that has wavy bangs hanging over her eyebrows with two distinctive buns on either side of her head and large brown eyes. She is usually seen wearing the usual Ouran Academy uniform, but is sometimes seen in alternate outfits, such as a white bikini when the Host Club takes their guests to a beach.

Momoka is an intelligent, organized and friendly girl who is the object of Kazukiyo Soga's affections. She has an obvious crush on Haruhi as Momoka likes hearing Haruhi's stories about her mother and finds Haruhi cute when Haruhi compliments her.

Momoka is one of Haruhi's regular guests and is usually seen around her whenever Haruhi is entertaining; however, Momoka is the only one whose name is revealed in the anime. Momoka seems to be the leader of the group of three since she is always shown in front and she has the most speaking lines out of the three Haruhi fangirls. In fact, she talks to the Host Club more than any other customer.

As the vice-representative of Class 1-A, Momoka tells Haruhi how things work at Ouran and what special traditions they follow along the way. She also constantly hugs Haruhi whenever they are in Music Room 3 .

Her family owns a private ski resort, as seen in Chapter 60.

In Ep 21 - Until the Day It Becomes a Pumpkin! it is revealed that Class President named Kazukiyo Soga, has a crush on Momoka and he wants to prove he's not a scaredy-cat so he can impress her at the Halloween event. Though his fears get the best of him, he lasts longer than Momoka, who's paired with Renge.  Following the event, Momoka tells Kazukiyo that she's impressed by his chivalry and that she couldn't last as long as he did, causing him to blush. Kazukiyo knows she has a crush on Haruhi, whom they both believe to be a boy, and says that he is content to be her friend and get closer to her by being class reps together.  In the last episode of the anime, they are seen dancing together at the school festival. In the manga, it is revealed that Kazukiyo eventually admits his feelings to Momoka at university.

It is shown that she has romantic feelings for Haruhi throughout the series, examples being when she asks Haruhi to dance with her at the dance party or blushing when Haruhi calls her swimsuit cute.  It is even obvious to Kazukiyo that Momoka has feelings for Haruhi.  In the epilogue of the manga, Haruhi, now an Ouran University student, is shown studying with Kazukiyo and Momoka who are also law students, proving that their friendship continues even after high school.  Although the two now know that Haruhi is a girl, they still call her "Haruhi-kun" out of habit.

Momoka and Kimiko are best friends and are Haruhi's best customers.  Kimiko is almost always shown with Momoka. The two win a special date with one host club member and, naturally, they choose Haruhi. By the conclusion of the manga, they are shown to be very accepting of Haruhi's cross-dressing, not knowing that she is really actually a girl as shown in the final chapter. Still, Haruhi is touched by their final messages to her. 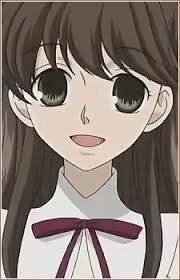 As she appears in the DS game