Michelle Erica Monale is a dual character playing differing roles between the manga and the gekijouban.

Michele is a princess from the tiny European Kingdom of Monale. She transfers to Class 1-A at Ouran Academy for two weeks in order to observe the Japanese high school system. She closely resembles Tamaki Suoh's mother, Anne-Sophie de Grantaine, thereby garnering Tamaki's utmost attention. Although she acts rude and spoiled for most of her stay, it turns out to be an act in order to get her older brother's attention. She appears in in Chapters 38-40 of the manga.

The Kingdom of Monale is a fictional country in Europe with a prosperous mining industry. Monale is classified as wealthy, but the income gap is wide. The king and queen are deceased due to a "freak accident" three years prior, leaving Michelle's 21-year-old brother, Rolance, as ruler. Prince Rolance is a practical man who lives humbly and actively speaks with the citizens of Monale, his goal being to keep Monale prosperous and peaceful. Upon learning this, Kyoya Ootori says there is "no way" Rolance and Michelle live in the extravagance Michelle claims.

Michelle, on the other hand, appears to be spoiled and self-serving when she first arrives at Ouran, appointing the Ouran Host Club as her "personal attendants," much to the chagrin of Hikaru and Kaoru Hitachiin. She makes ridiculous demands, such as an on-campus massage parlor and a sofa to sit on in class. Tamaki notices that her demands keep rising when they fail to get her in trouble and he finally tells her to stop pretending. Michelle, it turns out, is acting out in the hopes of gaining her distant brother's attention. She's ashamed of her treatment of the students and admits that she's terribly embarrassed to be so pampered. She hates taking "dainty bites" of the food she is served and the twins note that she "sounds poor." In truth, her genuine personality is humble and quirky. She is very grateful for the students' kindness and understanding and invites them to visit her in Monale sometime.

Michelle is a central character in the gekijouban. 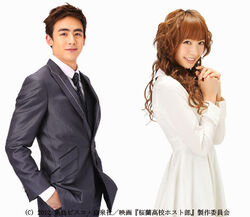 However, instead of a royal princess, she is the heiress of Monale Inc. from Singapore, making her full name Michelle Erica Monale. The role of Prince Rolance is altered to Lawrence Monale, president of Monale Inc. and older brother to Michelle. Because Monale Inc. is financially unstable, Lawrence is always stressed, busy and unable to spend quality time with her after the tragedy of their parents' passing.

After enrolling in Class 2-A at Ouran Academy, Michelle attempts to woo Tamaki into a business marriage to save her family company and ease her brother's burden. She is unaware that Shizue Suoh, Tamaki's grandmother, does not acknowledge him as heir to Suoh Corp. When Shizue learns of Michelle's dispicable behavior at school and her attempt to manipulate Tamaki, she cuts all business ties to Monale Inc. Lawrence is frustrated not only by the financial loss, but mostly by Michelle's perceived loss of family pride. Michelle grieves that her actions will not be forgiven. Haruhi Fujioka desires to set things right and disprove Michelle's notion that family bonds, including those in the Host Club's "family," are weak.

Kyoya arranges a business meeting with Lawrence to outline a plan for Monale Inc.'s finances, thus earning a new ally for The Ootori Group. In exchange for his assistance, Lawrence accompanies the club to the Ouran Battle, winning them the treasure hunt for "the Monale family treasure," in which the prize is the rights to the coveted Central Salon for the annual Ouran Fair. Lawrence apologizes to Michelle for thinking that he only needed to provide for her financially, now realizing that his emotional support is just as important. He promises to be there for her from now on.

When Tamaki first sees Michelle, he mistakes her for his mother, Anne-Sophie, because of Michelle's blue eyes and honey-blonde hair.  He works tirelessly to meet her ever-rising demands. He realizes that her brattiness is a ploy and that her smiles are fake, so he arranges for her brother to come see her so that he may see her true smile. Kyoya tells the club that the last time Tamaki saw his mother she was crying, and that he desperately wants to see her smile again even if he can only do so through Michelle.

In the manga, the twins strongly dislike Michelle for her brattiness and "excessive sibling love" of Rolance, although Haruhi thinks they're being hypocrites. In both versions, they work hard to please her when they realize how much it means to Tamaki, but they are still annoyed with her the entire time.

and since their parents died, he is the only person to whom Michelle feels close. In the manga, he is the ruler of Monale and always busy. In the gekijouban, he is the CEO of Monale, Inc. and similarly preoccupied. In both roles, he is often forced to leave Michelle alone, which results in her feeling pushed away. She wants him to realize that she can be helpful to him, so they can spend more time together. When Rolance/Lawrence comes to Ouran, he tells Michelle that part of the reason he works so hard is to keep her happy and safe, but now realizes that their personal relationship is also important. 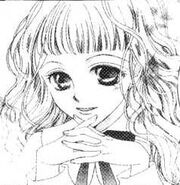 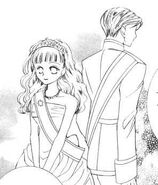 Michelle as the royal princess

Michelle being pampered at Ouran

Class 1-A catches her venting her frustrations 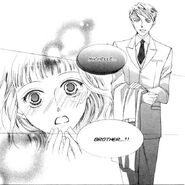 A surprise visit from Rolance

Michelle is the humble type 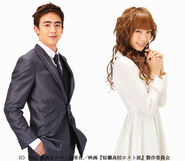 Lawrence and Michelle Monale of Monale Inc.
Community content is available under CC-BY-SA unless otherwise noted.