Chapter 42
Mei Yasumura is Isao "Misuzu" Sonoda's daughter and a manga-only character. She hates the fact that her father renames himself "Misuzu" and is a cross-dresser, as it is the reason for her parents' divorce. Mei is very loud and crude, often cussing and dressing in gaudy clothes. She attends Umeshiba Girls' High School and becomes Haruhi Fujioka's closest female friend.

Mei dresses in ganguro fashion. She is described as being overly-tanned with bleached-blonde hair, fake eyelashes and wearing too much makeup and not enough clothing. She is actually quite plain beneath the cosmetics and resembles her father, especially her lips.

Mei enjoys designing and making her own clothes and is Yuzuha Hitachiin's self-proclaimed "biggest fan." She wakes up early in the morning to sew clothes and put on her "face." In a side note in Volume 14, it's mentioned that her fashion sense evolved to be so "individualistic" because she has an identical twin, although said twin is neither seen nor named. During her college fashion show, she tells Ritsu Kasanoda that fashion is the only thing about which she is passionate.

Mei's parents have been divorced for seven years and Mei's mother is awarded custody. Yasumura is the surname of Mei's stepfather, with whom Mei and her mother reside. It is only when her stepfather is away on an extended business trip that Mrs. Yasumura arranges for Mei to stay with Misuzu for the summer and their tempestuous relationship ensues. At one point, Mei runs away from home and the Fujiokas take her in for a while, hoping that she might open up to Haruhi since they are the same age. During her stay, Haruhi secretly prepares recipes for her using Misuzu's recipes.

The hosts are initially confused by her appearance and vulgarity, which is in stark contrast to the refined girls at Ouran. They insult her tremendously during their first meeting, asking if she's wearing so much makeup for Theater Club and if her short skirt indicates a membership in the Tennis Club. Mei, like so many other girls, develops an instant crush on Tamaki Suoh, saying that no guy has ever been so sweet to her. During the summer festival, the hosts devise a plan for Misuzu to save Mei from a gangster (Kasanoda, who is also in on the plan), but the plan fails when she proves to be more than capable of fending for herself. Ironically, the two begin dating while they are in college together.

Mei also realizes that Tamaki and Haruhi might be in love with one another, but are too dense to realize it. She is, in fact, the first person to notice Haruhi's feelings for Tamaki, even calling Hikaru Hitachiin stupid for dismissing Haruhi's feelings as platonic. Haruhi later turns to Mei for love advice in regards to both Hikaru and Tamaki.

Mei is disgusted by her father's cross-dressing and cross-dressing, in general. She and Misuzu were close when she was younger, cooking and sewing together. After her parents' divorce, though, her mother disapproved of Misuzu spending time with Mei, resulting in Mei feeling abandoned by her father. Because of this, she developed hard feelings towards him and even runs away when forced to stay with him over summer break. Eating Misuzu's cooking, thanks to Tamaki and Haruhi, bring back good memories of her father from her childhood, but she still dislikes him. In a side note in Volume 14, it's revealed that she finally makes amends with Misuzu and that the two eat dinner with the Fujioka on a regular basis.

Mei lives with the Fujiokas over summer break and eventually becomes good friends with Haruhi. Mei disapproves of Haruhi's cross-dressing and is embarrassed that the girls at Umeshiba and Ouran think that Haruhi is her boyfriend. While Haruhi is mostly indifferent to her friends' wealth, Mei is continually impressed and flustered by first-class treatment. Mei provides Haruhi with love advice, using a girls' magazine to help Haruhi understand her feelings for Tamaki. This assistance gives Tamaki an advantage over Hikaru. Mei also makes clothes for Haruhi and enjoys dressing her up.  In Chapter 82, it's mentioned that she helps prepare Haruhi for her first date with Tamaki and lends her an outfit. Haruhi and Mei may be considered "best friends" as their relationship with one another grows obviously closer throughout the manga series and she is the only girl with whom Haruhi shares her deepest feelings.

Mei thinks Tamaki is incredibly gorgeous and develops a crush on him because of his kind personality. While Haruhi doesn't really understand Mei's aversion to Misuzu, Tamaki is better able to relate to the complicated feelings of being left behind by a parent and determines to mend their relationship. His schemes initially fail, but Mei does slowly warm up to Misuzu. Mei is sympathetic towards Tamaki when Haruhi rudely ignores him, understanding that he harbors disavowed feelings for the brunette. She later helps Haruhi realize her own feelings for Tamaki and is a big supporter of their relationship. It is mentioned in Volume 12 that she texts Tamaki frequently, and to Kyoya's annoyance, Tamaki picks up on her emojis and slang.

Mei is an aspiring designer and a huge fan of Yuzuha who, after meeting her at the Hitachiin mansion, gushes that Yuzuha is the "perfect" woman. Being the first person to realize Haruhi's feelings for Tamaki, she is also the one to bring it to Hikaru's attention, causing him to become intensely jealous of Tamaki, even though he's still oblivious to his own romantic feelings for Haruhi. Kaoru tries to prevent Mei from further assisting Tamaki, but Mei is undaunted. The twins get along well with her as evidenced by their invitation to their New Year's party at their mansion, where Kaoru expresses his concerns to her about Hikaru's confession to Haruhi. Mei advises Haruhi that while it's rude to not notice Hikaru's feelings, it would be even worse to date him out of pity. Later on in the manga, the twins agree to be models for her fashion show, but send Kasanoda in their stead in a scheme to set the two up on a date.

As part of Tamaki's scheme to mend the relationship between Mei and her father, Tamaki persuades Kasanoda to harrass her at the summer festival so Misuzu can "rescue" her. Mei, however, doesn't need any saving and actually scares the yakuza group away. In the 2011 July Special , while in their first year of college, the twins send Kasanoda to replace them as models in Mei's fashion show. It turns out that Haruhi also had a hand in the scheme, because she thinks that Mei and Kasanoda are lonely and would take good care of each other. Kasanoda is initially intimidated by Mei's brashness and argumentative nature (he himself comments that she seems more like a yakuza than he does), what he sees as her excessive amounts of makeup, and her style of dressing. It's the fact that she needs his help that eventually appeals to him the most and builds his self-confidence, although no romantic relationship is formed at the time. In the volume 18 extras, Kasanoda is seen shopping with Mei, now his girlfriend, who is informing him (to his astonishment) that Haruhi is pregnant and commanding him to knit something for the baby; his friend Tetsuya Sendo can be seen in the background, cheering him on and voicing his approval of Mei. 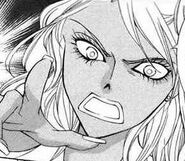 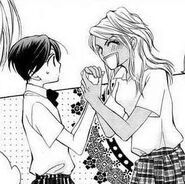 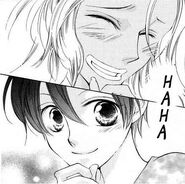 Mei Yasumura is the only non-Host to appear on a magazine cover.