Megumi Kanoya is a manga-character only. She is in Class 2-A with Tamaki Suoh and Kyoya Ootori.

Megumi has long brown hair and large dark eyes, like Haruhi Fujioka; however, Bisco Hatori herself said that this was only due to her poor artistic skills. Others refer to Megumi as Tamaki's "Dream Haruhi," meaning that she behaves the way Tamaki wishes Haruhi would in thinking of Tamaki as her surrogate "father."

Megumi is the type of person who will comply with anyone's silly request if it means helping the ones she loves. She latches herself onto Tamaki after he "saves" her from a horse during an Ouran Host Club equestrian outing. Tamaki is intrigued by her because she resembles Haruhi, but acts more like he wishes Haruhi would act. Even so, he tells Megumi that they can't date.  Still, she provides massive picnic lunches for the two of them to eat together.

Megumi comes from a wealthy family that lives in Kobe, though she herself lives in Tokyo in order to attend Ouran Academy. Her father owns a traditional Japanese restaurant and she often helps him in the kitchen there. When her father becomes a comedian/chef, Megumi's mother forbids him to see Megumi ever again.

After the Host Club (with the help of Kazukiyo Soga and Ritsu Kasanoda) helps her to realize what she needs to do to support her father, she stops clinging to Tamaki, though it remains unknown as to whether or not she moves back to Kobe to be with her father. 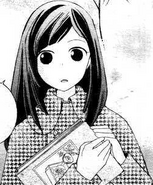 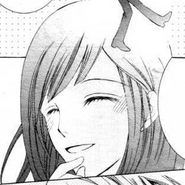 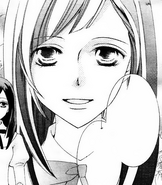 Add a photo to this gallery
Retrieved from "https://ouran.fandom.com/wiki/Megumi_Kanoya?oldid=41128"
Community content is available under CC-BY-SA unless otherwise noted.