Kotoko Fujioka (née Katayama) was the wife of Ryoji "Ranka" Fujioka and the mother of Haruhi Fujioka. Kotoko died when her daughter was approximately five years old (four years old in the manga), based upon Haruhi's remark at the beginning of the series that ten years had passed since Kotoko's death. It is known that she was a fine attorney who remains a role model for her daughter, who takes after her in both brains and beauty.

When she was alive, Kotoko was a loving wife and mother as well as a fine attorney-at-law. One may also assume that she was a tolerant and open-minded individual, as she accepted Ryoji "Ranka" Fujioka's career choice and bisexual orientation without hesitation.

Kotoko is said to have been very intelligent, sweet and caring and that she wished nothing but the best for her family. She was also said to be a good cook. In Ep 19 - Lobelia Girls' Academy Strikes Back!, it is revealed by Ryoji that Kotoko was an alumina of St. Lobelia Girls' Academy and a former fan of the Zuka Club (indicating that Kotoko was a student at St. Lobelia Academy).

Her teachers and peers recognized her talent and expected her to become an elite, but Kotoko decided to take a small-time, altruistic job helping local citizens instead. After graduating, she also gave numerous speeches at her law school. Kouhai Yuko Kosaka, though she admired Kotoko's talent, saw her disconcern with money as a luxury of choice.

Kotoko met Ryoji while he was working as a bartender, and he provided the winning testimony in her first court case. He fell in love after witnessing her talent as a lawyer and broke off his affair with a married man to be with her. At first, she found him to be annoying, but their relationship developed after Ryoji saved her from an enraged person in a public park.  Kotoko was flattered that he cared so much about her safety and Ryoji was further smitten when it turned out that she could've easily defended herself with her karate skills. They began dating when she was 25 and he was 19. Their wedding was described as a "shotgun wedding" and many friends and family members disapproved of their romance.

Kotoko's is mentioned by Haruhi in  Ep 01 - Starting Today, You Are a Host! and "seen" in Ep 10 - A Day in the Life of the Fujioka Family! where her memory appears in Haruhi's mind as she is best remembered - in her work suit, telling Haruhi that's she going to win her current legal case and holding up two fingers in a "peace sign". Kotoko is actually speaks as a character in Ep 13 - Haruhi in Wonderland! in which she plays the role of the masked Queen.  With the exception of the final scene, the entire episode is a dream-state wherein Haruhi explores her "place" at Ouran and is provoked into expressing some of her deepest still-held sorrow over her mother's death.

Kotoko is Ryoji's wife, who was six years older than her husband. Despite her illness-related death when Haruhi was five years old and the passing of time afterwards, it is shown that her widowed husband still loves her deeply. When the two first met, she found him to be a strange and annoying person, but she developed a better opinion of him when he saved her from an enraged person at a park and eventually fell in love with him. Ryouji is shown to maintain a family shrine in their home to honor Kotoko's memory. Even now, Ryoji still deeply loves Kotoko and he currently only dates men because he swore to never fall in love with another woman.

Kotoko is Haruhi's mother. Kotoko's kouhai were shocked when her promising career as an attorney was interrupted by her unplanned pregnancy. Kotoko passed away when Haruhi was only five years old from an unspecified illness. While some people think this early loss is the reason Haruhi is so aloof, Haruhi disagrees, claiming it's just her natural-born personality.  Haruhi's desire to follow in her mother's career footsteps is what led Haruhi to apply to and enroll in Ouran Academy and to later study abroad in America.  Haruhi also acquired her great cooking skills by studying her mother's recipes after her passing. It is said that Haruhi inherited Kotoko's brains and beauty.

Kotoko inspires her daughter to become a lawyer

Kotoko's shrine at the Fujioka apartment 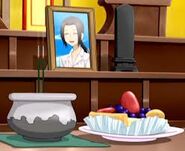 Kotoko with a young Haruhi and friend in the DS game. 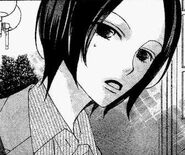 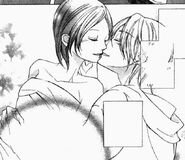 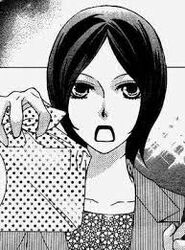 Retrieved from "https://ouran.fandom.com/wiki/Kotoko_Fujioka?oldid=39303"
Community content is available under CC-BY-SA unless otherwise noted.