Kimiko Sakurazuka is one of Haruhi Fujioka's fangirls who is also one of the three girls always shown in Haruhi's group. She is in Class 1-A, the same class as Haruhi, Hikaru Hitachiin, Kaoru Hitachiin and Renge Houshakuji.

Kimiko is a pale-skinned girl with neck-length brown hair that has bangs hanging over her eyebrows and grey eyes. She is usually seen wearing the Ouran Academy's high school girls' uniform and only seen wearing a different outfit on several occasions such as when the Host Club went to the beach, where she wears a black two-piece bikini outfit.

Kimiko and Momoka Kurakano are best friends and, along with Renge Houshakuji, make up Haruhi Fujioka's most devoted customers.  She and Momoka have been in the same class since grade school and her family owns a botanical park, as seen in Chapter 70 of the manga.

Kimiko has O-type blood, which is thought to make people more agreeable. She is said to get along with everyone, as she has no prejudices. This is demonstrated when she tells Haruhi she looks beautiful cross-dressing in girl's clothes, and later when she easily accepts that Haruhi is, in fact, a girl.

Kimiko actually appeared in Ep 01 - Starting Today, You Are a Host! and appears almost every single time a Host Club meeting is shown in progress in Music Room #3 .  Bisco Hatori said she always wanted to write a chapter starring Kimiko and Momoka, but never got around to it.

Momoka and Kimiko are best friends and are Haruhi's best customers.  Kimiko is almost always shown with Momoka. The two win a special date with one Host Club member and, naturally, they choose Haruhi. By the conclusion of the manga, they are shown to be very accepting of Haruhi's cross-dressing, not knowing that she is really actually a girl as shown in the final chapter. Still, Haruhi is touched by their final messages to her. 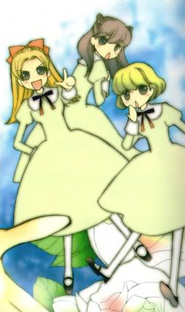 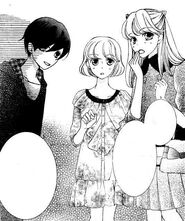 Kimiko and Momoka Kurakano on their garden date with Haruhi Fujioka

Kimiko in the DS game
Add a photo to this gallery

Retrieved from "https://ouran.fandom.com/wiki/Kimiko_Sakurazuka?oldid=39305"
Community content is available under CC-BY-SA unless otherwise noted.