Kanan Matsuyama is the Student Council secretary to President Toshiyori Matsudaira.  Her family owns the second biggest share of imported produce in Japan.  She is engaged to her childhood friend Takeshi Kuze, whose family owns the largest share of imported produce.  She can be very harsh with her words but has a great sense of humor.  Her parents are good friends with the Ootoris.  She is a senior alongside Honey, Mori, Nekozawa and Kuze, and later attends Ouran University.

Kanan is never seen without her hair in two long braids, even in preschool flashbacks. She is usually seen in her school uniform. In one flashback, she is seen in a dress watching Kuze and Kyoya play cards. After she graduates high school, she is seen twice in a skirt.

Kanan can be rather mean to Kuze.  She also likes to prank Kuze, as seen in the Volume 12 omake, though Kyoya says she's "surprisingly romantic and feminine."  Kanan thinks Kuze is simple-minded and foolish, but also says that's what makes him cute.  The two are described as "lovey-dovey," and although they have been engaged since childhood, Kanan wants Kuze to propose to her formally on his 18th birthday.

Although Kyoya is a year younger than she, their parents are good friends, thus the two adolescents have been friends since childhood despite Kyoya's rivalry with Kuze.  They seem to understand each other fairly well and both enjoy getting a rise out of Kuze.  Kanan tries to dissuade her fiance from challenging Kyoya, because she knows Kyoya will always win.

Kanan and Haruhi have limited interactions. In the sports festival arc, Haruhi is forced to help Kyoya solve the "mystery" of threats to make the Host Club drop out of the race.  Not realizing that the two are engaged, she assumes that Kuze is blackmailing Kanan for help.  In an omake, Kanan asks Haruhi to deliver a birthday present to Kuze that turns out to be a prank gift. 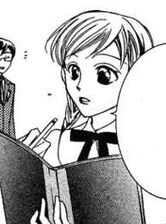 Kanan and her notebook 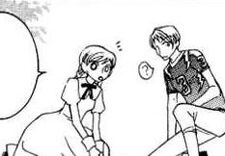 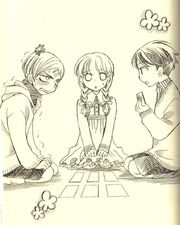 Kanan with her childhood friends, Kuze and Kyoya.
Add a photo to this gallery
Retrieved from "https://ouran.fandom.com/wiki/Kanan_Matsuyama?oldid=35134"
Community content is available under CC-BY-SA unless otherwise noted.