Pension owner in the resort town of Karuizawa.

Isao Sonoda (aka Misuzu) is Ryoji Fujioka's friend and a former employee at the okama bar at which Ryoji works.  He has a daughter named Mei and a pension in the resort town of Karuizawa, where Haruhi Fujioka is sent to work for the summer.

During the anime series, Ryoji entrusts Haruhi to Misuzu's care during the summer because he must work and doesn't wish to leave Haruhi unsupervised.  This, however, is speculative as it has also been suggested that one of the reasons Ryoji sends Haruhi to Karuizawa is because the daytime is when he brings home his lovers.

Misuzu used to be a banker, but now runs a popular resort pension in Karuizawa, known for its rustic locale and outdoor activities.  While Haruhi is working voluntarily for him, the Host Club arrives and Misuzu is thrilled.  Because there is only one vacant room available and most of the hosts want to stay there, Misuzu conducts a contest to see which host is the most "refreshing" (i.e. desireable) based on points earned throughout the contest.  A refresher point is revealed to be a measure of how much amorous emotion the host can generate among the pension's guests.  In the end, he is swayed by Kaoru Hitachiin and Hikaru Hitachiin's unintentional display of "brotherly love" that earns them "100 refresher points."

In the manga, Misuzu is shown to be an excellent tailor with a love for making frilly clothing.  He also used to be married and has a daughter named Mei Yasumura, who disapproves of his transvestite lifestyle. It is later shown, however, that the real reason for her resentment stems from Misuzu's abandonment of her mother and herself in order to pursue his dream of owning and operating a pension. 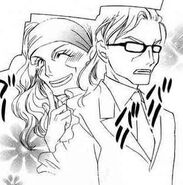 With his daughter, Mei. 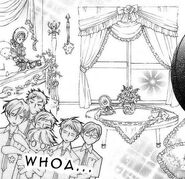 Misuzu's home and its lolita decor.
Add a photo to this gallery

Retrieved from "https://ouran.fandom.com/wiki/Isao_Sonoda?oldid=39607"
Community content is available under CC-BY-SA unless otherwise noted.