Hayashi Dry Cleaning catered to the Suoh Group before being cut off. In financial desperation, two workers mistake Haruhi for an heiress and kidnap her to earn a ransom.

Hayashi Dry Cleaning is a regular contractor with the Suoh Group and has handled most jobs for the Suoh theaters and hotels, even before Shizue Suoh became Chairman. Their old-fashioned, manual services are of high-quality. After the expiration of their last contract, Suoh Group slowly transfers business to larger dry cleaners with more modern equipment before cutting off Hayashi entirely. Since Hayashi marketed mostly to corporate groups, local clientale was not enough to keep the business afloat. When the hosts and Mei take a New Year's visit to Asakusa Temple, two workers from Hayashi spot Haruhi with Tamaki and as soon as she is seperated from the pack, they kidnap her in hopes that the ransom will re-finance their failing business. Lawyer Kosaka, who is keeping tabs on Tamaki, sees Haruhi driven away in a strange car and notifies the hosts, who set off to rescue her. The boss is devestated to find out what his two workers have done. Upon realizing that Haruhi is not an heiress, they plan to bring her back to the temple, but since she has already seen their faces, they tie her up (loosely and in a soft sheet). The boss tells his workers to leave so he can take the blame, but they refuse to betray him. The hosts then break into the shop. When Kosaka asks if Haruhi intends to press charges, she refuses because her kidnappers are kind people. Tamaki tells the workers to bring any complaints directly to him in the future, and Kosaka offers to introduce them to a lawyer who can help restructure their business. 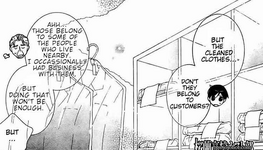 Add a photo to this gallery
Retrieved from "https://ouran.fandom.com/wiki/Hayashi_Dry_Cleaning?oldid=32498"
Community content is available under CC-BY-SA unless otherwise noted.