Heiress to the Ootori family

Fuyumi Shidou (矢道 芙裕美 Shidō Fuyumi), née Fuyumi Ootori (鳳 芙裕美 Ōtori Fuyumi), is the married older sister of Kyoya Ootori who seems to spend considerable time with him. She appears in Ep 24 - And So Kyoya Met Him!, which is primarily a flashback of Kyoya meeting Tamaki Suoh and their initial interactions during junior high.

Fuyumi is a slender young woman with dark gray eyes and wavy long black hair with bangs hanging over to the right side. In a flashback, she is seen wearing a knee-length light green dress with a light green choker and a white short-sleeved jacket.

As seen in the flashback, Fuyumi is a bright and sweet young woman who is friendly with Tamaki due to the fact that they both have an interest in commoner cuisine and care about Kyoya a great deal.

In the anime, Fuyumi enters Kyoya's bedroom and begins tidying up what she perceives to be over-stuffed bureau drawers, which Kyoya tells her to leave be. She insists, going on to chat with him about the demands made upon Kyoya by their father who, she learns, has insisted that Kyoya befriend the "new kid at school" - the son of Ouran Academy's chairman - Tamaki Suoh. Fuyumi clearly cares for her younger brother and tries to help him in life, reminding him that he doesn't have to push himself so hard because he already does everything remarkably well. Time and time again, she listens as Kyoya rants about the sight-seeing that Tamaki is having him arrange and in a side-bar, Fuyumi's thoughts reveals that although Kyoya is annoyed with him, she's secretly glad to see him react with genuine emotion. When Tamaki actually visits the Ootori home, it is Fuyumi who recognizes him as Kyoya's "friend" and stands beside Kyoya as they listen to Tamaki play the piano. It is revealed in the manga that she is in an arranged marriage to a man of the surname Shidou, but it is a love match. When she returns home for a brief visit, she is chided by her father for not being at her own home, taking care of it. Fuyumi and Tamaki are pursuing a tour of commoners' food together and have a pleasant relationship. 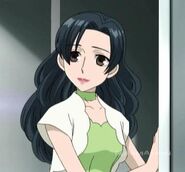 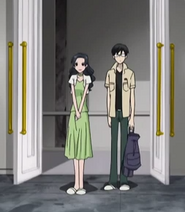