Haruhi on the job.

Honey and Mori charm ladies of all ages.

Tamaki charms them all.

"Your impulsiveness overwhelms my accounting skills." 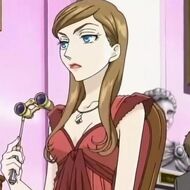 The mysterious guest in the Central Salon.

Pretending not to notice...

...but curious, just the same.

Chairman Suoh has a request; Tamaki watches ...from a chandelier.

"So this guy is Tamaki-senpai's father?"

"It would please me." 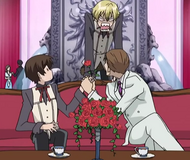 "Father, what do you think you're doing? Remove your hands at once, please!"

Tamaki wonders if the Host Club is to blame.

"You will be Lady Éclair's personal escort."

Tamaki complies with his grandmother's wishes.

"Who is she to him? That's the mystery."

"Éclair Tonnerre of the renowned Tonnerre Family. They descend from royalty."

"Indeed. Their wealth is something of a legend." 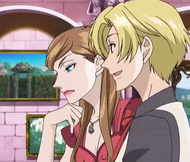 ...as she thinks about someone she knows at home.

Come into my web, said the spider to the fly.

"Everyone's upset. You should be with your club."

"Oh Haruhi, is it true? You're actually jealous???"

The lovelight in Tamaki's eye.

He tries to leave, but Éclair holds him back and...

...and pushes him onto a sofa.

"Wouldn't you prefer the real thing? 'Cause I can give it to you, you know."

The court, minus one king, as Haruhi gets a history lesson.

...until he falls in love with Anne-Sophie...

"I'm leaving my wife and marrying her." 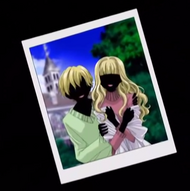 Mother and son in happier times, until money dwindles...

...and her health weakens. A deal is struck.

...to live under the rule of his grandmother.

Divorced, but unable to remarry, Yuzuru struggles to meet all of their needs.

"He'll be fine. The Host Club is his refuge, which means..."

"Everyone...I have an important announcement."

"...Lady Éclair Tonnerre and I are officially engaged."

"Furthermore, the Host Club will be permanently dissolved..."

"...after the Ouran Fair. That is all."
Add a photo to this gallery
Retrieved from "https://ouran.fandom.com/wiki/Ep_25_-_The_Host_Club_Declares_Dissolution!/Image_Gallery?oldid=38913"
Community content is available under CC-BY-SA unless otherwise noted.