And so Kyoya Met Him!

And so Kyoya Met Him! is the 24th episode in the anime series. Kyoya recalls for Haruhi how he and Tamaki first met and became the best of friends. Their friendship starts out as an "assignment" from Kyoya's father to befriend Tamaki. Kyoya's patience is tested by Tamaki's odd requests, including sightseeing all over Japan. Ultimately, he snaps; but instead of being put off, Tamaki accepts the bespectacled brunet as he is. From that point on, their friendship is established and grows into their being "best friends," just as Tamaki wanted from the outset.

The episode opens in Music Room #3 with the Host Club's guests discussing the kotatsus in the room. Kyoya looks up at Tamaki from his notebook as the blond expresses his hope that the girls will enjoy the home-style service of dining under a kotatsu.  While standing beside the brunet Host, Haruhi asks if the kotatsu service was Tamaki's idea to which Kyoya replies, "Yeah," and continues writing.  She then inquires, "Why would someone as cool as you fall for a crazy idea like a high school host club?" Kyoya looks over to where Tamaki stands and with a small smile says, "Well, because it was a crazy idea."

Flashback two years before the first episode with Kyoya entering his final spring in middle school. A shot of Kyoya's bedroom suite is shown, vacant and empty. He's then depicted at school, speaking with various classmates who express friendliness while Kyoya only thinks about their socio-political merit.  When he's invited to go to the mountains to star-gaze, Kyoya remarks to himself that he could care less for the stargazing, but is very interested in meeting the boy's important father.

Scene skip to Kyoya's home that evening where his older sister, Fuyumi, berates him for imposing on the boy in order to gain access to the father. Kyoya replies that it's simple give and take. Fuyumi then reminds him that as the third son, their father expects less of him than of their older brothers to which Kyoya expresses regret, but determines to not only surpass his father's expectations but to never step on his brothers' toes in the process -- a daunting task expressed as being forced to paint a perfect picture already placed in a magnificent frame. Fuyumi compliments his ambition but asks if that will make him happy. Her brother replies that his happiness is irrelevant, insinuating that all of his emotions are likewise.

Kyoya's voice is heard as a voiceover, commenting on his brothers' successes as the four Ootori males are seated at a table, dining. Kyoya's father commands that his son befriend Tamaki Suoh, a new transfer student, because it "would be in our family's best interest." Despite Fuyumi's previous words, the Ootori patriarch makes it quite clear that Kyoya must surpass his brothers in order to please him. Desperate for recognition, Kyoya agrees to befriend Tamaki, remarking to himself that it will be an easy task.

Kyoya researches Tamaki on his laptop. His intial opinion of the Chairman's son is disdain and envy for the "love child's" easy path to patriarchy of the Suoh family. Skip ahead to the following day when Tamaki is introduced to Kyoya and Ayame, the class representatives. Tamaki gushes over Ayame's beautiful hair and when she blushes, Kyoya wonders if Tamaki's effect is based on his European upbringing. The two boys shake hands and Kyoya invites Tamaki to tour the school. Tamaki happily agrees.

As they walk, Tamaki asks if Kyoya has a kotatsu at home, sadly saying that his own home has Western decor. Kyoya disparages Tamaki's fascination with Japanese culture to himself as he informs Tamaki that his family doesn't own a kotatsu, but does have Japanese decor. Tamaki apologizes for being insensitive in asking about the kotatsu, since he knows that only happy Japanese families have one. Kyoya promises to place a kotatsu in his home, if Tamaki ever visits. Tamaki is thrilled, hugging the class rep and insisting that he and Kyoya are now "best friends," assuming he can call Kyoya by his first name despite not being given permission.

Scene skip back to Kyoya's bedroom where Fuyumi questions her brother's best friend status with Tamaki in only a day. Kyoya remarks that Tamaki doesn't understand the meaning of best friends and wonders if the boy is even fluent in Japanese. He admits that although Tamaki was able to draw him in like all the others, he considers Tamaki a complete idiot.

The following day Tamaki tells Kyoya he wants to visit Kyoto, listing several tourist locations not located in Kyoto. Kyoya corrects his misperception but agrees to show Tamaki the sights.  Tamaki calls him a god.  While in Kyoto, the brunet reflects upon Tamaki's illogical-yet-charming nature and his having already won over their class. When Tamaki impugns Kyoya's ability to entertain him, Kyoya creates the perfect itinerary for visiting Hokkaido, only to be told that he should be "hitting the books" for finals by none other than, Tamaki. That evening, the calm facade is shattered and Kyoya rants to Fuyumi, "I've never wanted to hit someone so badly in my entire life!" Instead of being shocked, Fuyumi is secretly pleased to see her brother express honest emotion.

Skip to the following Sunday where Fuyumi meets Kyoya at the front door and tells him "his friend" is there. Inside, he hears Tamaki play the piano for the first time, bringing him to tears. Later, as the boys make small talk, Tamaki cuts to the heart of the matter and asks about Kyoya's true feelings towards heading the Ootori family. Kyoya reveals his envy of Tamaki's ease of succession in the Suoh family to which Tamaki replies that, given his grandmother's dislike of him, is not guaranteed.  Tamaki's cavalier attitude infuriates Kyoya who tosses over the table at which they sit and berates Tamaki for being ungrateful, while wondering to himself how Tamaki is able to see through his own facade of complacency about the situation. Tamaki openly challenges Kyoya to shape his future to his own designs, after which the brunet laughs for the only time in the series.  His metaphor of life as a canvas reappears, now going beyond the frame of his prior limits to find his own path.

Scene skip to winter with the two friends seated at a kotatsu, accurately reflecting their happy relationship.  Tamaki outlines his plan for the Host Club which Kyoya intially deems ephemeral.  Still, because he's come to view Tamaki as a true friend who accepts him as he is, he realizes that the boy will only continue to expand his horizons for the better. In his tea, Kyoya spies an upright tea leaf, an omen of good fortune, and he genuinely smiles. 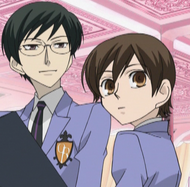 "Because it was a crazy idea."

Back then, the third son...was about to begin his final Spring in middle school.
Add a photo to this gallery

Retrieved from "https://ouran.fandom.com/wiki/Ep_24_-_And_So_Kyoya_Met_Him!?oldid=39001"
Community content is available under CC-BY-SA unless otherwise noted.