Sprint
Tamaki's Unwitting Depression! is the 23rd episode of the anime series. After Ritsu Kasanoda walks in on Haruhi Fujioka changing, he manages to stay alive despite the Hosts' fury and threats, both subtle and not so. Haruhi has never and still doesn't care who knows if she's a girl, but Ritsu imagines the worst and decides to protect her secret. He visits her at the Ouran Host Club and everyone is betwixt and between for different reasons: the Hosts worry that Haruhi may be enticed into the yakuza world while the guests overdose on moe vibes at the thought of two guys having a romance. Meanwhile, Tamaki Suoh goes into a catatonic state that requires "tough love" from the twins to get the Host King up and at 'em. When at last he intervenes and Ritsu learns of Tamaki's "Fatherly Love" for Haruhi, he finds the concept not only unbelieveable, but ridiculous. Tamaki is forced into confronting his fantasy and his genuine feelings for Haruhi, who remains clueless throughout the entire ordeal.

The episode picks up where the previous one ends, with Ritsu and Haruhi facing off in the prep room of Music Room 3 where Haruhi is changing her shirt and Ritsu catches a glimpse of her bra and bare back. He freaks out and immediately leaves only to run into the twins, who call him a "Peeping Tom" with malice in their eyes, and an altogether serious Mitsukuni "Honey" Haninozuka who states that Ritsu's denials of perversion sound like a guilty conscience speaking. Knowing the Haninozukas' reputation, Ritsu is scared for his life.

"So Fujioka is a girl?" he asks and everything stops. Hikaru Hitachiin and Kaoru Hitachiin decide inducing amnesia is necessary and prepare to hit Ritsu with a baseball bat until Kyoya Ootori calmly intercedes with, "That's enough you two. Leave assault and battery to the professionals." Tamaki is regressing rapidly, so Kyoya does what Kyoya does best: ruthless intimidation with a smile. Haruhi tells them to knock it off and apologizes for their rudeness. The twins ask Ritsu, "Now that you know that Haruhi's a girl, are you in love?" Tamaki's head explodes.

Later, at the Kasanoda residence, Ritsu's "fellas" weep in frustration, uncertain as to why their young lord can't eat and won't talk to them. Tetsuya Sendo divulges that he accidentally caught Ritsu admitting that he's in love with Fujioka. When they ask if he's got a chance at winning her heart, Tetsuya assents, adding that Haruhi has a very cute face - for a guy. Pandemonium ensues. By himself, Ritsu comes to the conclusion that Haruhi must be in some sort of trouble that forces her to dress like a boy and he pledges to keep her secret.

The next day, Ritsu visits the Host Club as a guest and requests Fujioka. Renge Houshakuji rises on her rig and with her maniacal laugh intones, "At last - the genuine article." The flames of moe sweep through the salon as Haruhi serves Ritsu tea and they begin to chat. The twins watch the ongoing exchange and ask Kyoya to evict him because he's scaring the guests to which Kyoya replies, "Oh no, I think not."  And he's right. The guests are, in fact, loving the "situation," inviting their friends to come and witness something truly amazing. 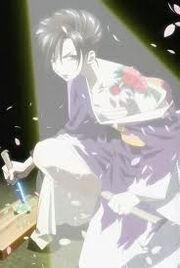 In desperation, the twins physically toss Tamaki towards the pair and he manages to stand upright and walk robot-like towards the couple, coming to sit between them. Haruhi moves him to one side and tries to keep him busy with a finger puzzle. The twins persist, calling him on his cellphone and asking him to imagine Haruhi as a mob wife which is when Tamaki goes beserk, demanding that Ritsu leave Haruhi alone and that, as her father, he forbids him to see her. Ritsu is understandably confused and states what Tamaki has denied for so long: he's not really Haruhi's father. Waking from his faint on the opposite side of the salon, Tamaki lies on the floor at long last admitting that he's not Haruhi's father, so why is he so jealous of other males paying her any attention?  The Hosts are astounded at his continued stupidity.

As they huddle at one end of the room, Haruhi and Ritsu watch from the other. Haruhi states that although Tamaki isn't her real dad, he sometmes acts like her dad. This restorative message recasts the "spell on the carriage" and Tamaki is rejuvenated in his convictions. That is, until Ritsu asks Haruhi if he can visit her at the salon from time to time. Haruhi agrees that it would be nice to be better acquainted. With his opening in sight, Ritsu attempts to declare his love only to be shot down into the friend-zone before uttering a word. Even so, everyone is so caught up in his drama and heartache that they begin to cry tears of moe devotion, declaring themselves all to be his friends. Renge leaves saying, "Adieu, brave one," as a stymied Tamaki sits on the floor with Kyoya and Takashi "Mori" Morinozuka nearby. Tamaki admits feeling empathy with the rejected Ritsu, which Kyoya points out as odd for a "father figure." The wheels spin in Tamaki's mind, perhaps for the first time. 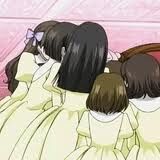 Skip scene to the Hosts and their guests (including Ritsu) playing Kick the Can on the Ouran Academy lawn. Tamaki grabs Haruhi's hand and drags her along, just as he's done in the past. The twins and Kyoya intrude on them and as they group huddle under a table within the gazebo, Honey and Mori sit up in an adjacent tree discussing how both Hikaru and Tamaki may be starting to understand their feelings towards Haruhi, but that between Kaoru and Kyoya, there may be someone even more oblivious about their intentions towards the girl.

The episode ends with Tamaki declaring that Haruhi belongs to him and Haruhi insisting, "I do not belong to anybody," her independent spirit being one of the reasons they all adore her so much in the first place.

Walking in on Haruhi.

The truth is uncovered.