Mori-senpai Has an Apprentice Candidate!

Mori-sempai has an Apprentice Candidate! is the 22nd episode of the anime series.  When the son of a yakuza boss, Ritsu Kasanoda, seeks out Mori's advice on how to change his scary image and gain friends, Tamaki and the Host Club are ready to assist. Ritsu endures their outrageous attempts to make him "cute" and their endless twisting of his surname. The ginger finds himself drawn to Haruhi without understanding why, believing that she is a "he" despite looking like a "chick." Tetsuya Sendo, a servant in the Kasanoda household, goes to Ouran to deliver an umbrella and, instead, finds two former Sendo clanmates threatening Ritsu who, they believe, kidnapped Tetsuya. He rectifies their wayward assumptions and tells them to get lost; he's a part of Ritsu's clan now, especially after the young lord helped him when he was down and out. All seems well and done when Ritsu heads back to Music Room #3 to apologize to Haruhi who got red paint splashed onto her during the two thugs' final attack; their dynamic altering dramatically once Ritsu learns that Haruhi is, indeed, a girl.

The episode begins at the Kasanoda Syndicate's main house and family residence. Ritsu, a student of Class 1-D at Ouran, walks past a group of tough-looking men who bid him have a good day at work several times before he turns, with a terrifying visage, to roar that he's going to school.Tetsuya, a younger clan member, asks if he'll be taking the car, but Ritsu declines. As he walks away, the crew advises Tetsuya to be more careful in how he addresses the "young lord" because his glare seemed more viscious than usual, an indication in their minds that he's ticked off at some stupid kid at school; and, in fact, Ritsu is preoccupied with another student: Takashi Morinozuka.  In the salon, the hosts are cosplaying in late Edo era samurai costumes. Haruhi expresses her surprise that it's so popular, with the twins informing her that it's a cosplay basic and Honey adding that the girls who love it are simply crazy about it. Renge unravels a mini-history lesson about the Ikedaya Inn and the noble shinsegumi, thrilling herself with her narrative. Kyoya compliments Renge on her suggestion that the guests be allowed to project identities onto the hosts instead of giving them specific roles; their friendly exchange indicative of a normalized relationship.

Mori sits by himself, with his clients discussing who he favors when the host suddenly leaps up and lunges his sword through the shoji door. Tamaki thinks he's angry because he's finally lost patience with his lacklustre script, but Mori declares no, that they have an intruder. Ritsu is seen rushing towards Mori with an angry face, only to fall to the ground in humility, begging for Mori to take him on as an apprentice. Kyoya rattles off pertinent information regarding the 1st-year, calling him a human weapon which Ritsu denies. Tamaki asks why he wants to be Mori's apprentice and the twins begin to call him Casanova and Bossa Nova instead of Kasanoda, causing the young lord to grimace menacingly. When they point out his scary-face, he grows despondent saying it's been this way since he was a child. Flashbacks show Ritsu as a toddler and then as a young boy, each with a fearful face, learning how to be a gangster from his father; except now he wants friends and doesn't know how to breach the social gap between himself and others. He hopes that Mori who, in his words, has a face like a "watchdog from Hell" but who has many friends and admirers will be able to teach him his "secret."

In a typical fashion, Tamaki refuses to involve himself in Mori's issue until the tall Host's eyes plead for it; then Tamaki gleefully leaps into action. The first thing Tamaki tells Ritsu he must obtain is a "lovely item" like Honey, who softens Mori's harsh image simply by being near him. The others agree that without Honey, Mori is just a big "bzzzt!" an idea that shocks the tall host, who then vehemently denies this to be the case when Honey sadly asks if he's being used as a prop. Tamaki sets the twins to work on Ritsu's "Yankee fashion sense," which they alter to make him appear totally ridiculous, without intention (?) At home, everyone pretends not to notice his red dreadlocks, polka dot scarf and Kuma-bear lovely item.

The following day, Ritsu approaches Mori and Honey, offering to carry Mori's schoolbag.  As he moves towards them, Mori pushes him back just in time to avoid being hit by a falling potted plant and then another.  In the salon, Ritsu states that he believes someone is after Mori. Tamaki considers that for a few seconds, then moves on to his "Turn Bossa Nova Into an Angel" Project. While the hosts discuss make-over plans, Haruhi serves Ritsu a cup of tea and sits with him.  Ritsu finds her strangely compelling and very much like a "chick." Tamaki is heard saying that Renge's inside scoop on "lovely items" is kitty ears and the twins suggest they go all the way.

Tetsuya arrives and sees his young lord dressed as a "kitty cat maid," but tells him he can do as he likes in his spare time; Ritsu, utterly embarrassed, runs away. Cut to Ritsu hiding in the garden maze, feeding an injured bird he's nursed back to health. Haruhi finds him and they converse easily, something Ritsu finds he can never do with a girl, except Haruhi is a "guy" which totally confuses him. Just then, a can of red paint comes flying at the pair, but is intercepted by Honey so only a bit of paint splashes Haruhi's blazer. The Hosts join them just in time to see Mori apprehending two punks (the same ones from Renge's movie shoot), who accuse Ritsu of kidnapping Boss Sendo's son. While Hikaru and Kaoru enjoy tying up the ruffians, Honey and Mori admit that they knew it was Ritsu being targeted, but kept quiet about it until they could capture the culprits. Ritsu inquires why they would help him and Mori pats his head saying, "We can tell who the bad guys are by looking at them," a statement which Ritsu finds touching, especially from someone he so admires.

Tetsuya Sendo arrives and berates the teenaged goons, revealing to Ritsu that he is the son of the head of the Sendo Syndicate but left home because of their cut-throat tactics. Flashback to Tetsuya on the street, lonely and sitting in the rain when Ritsu extends both an umbrella and a hand in friendship, earning Tesuya's loyalty and devotion. Ritsu asks Tetsuya to wait for him as he heads back to Music Room #3 to apologize to Haruhi for ruining her blazer. Upon finding the salon empty, he enters the prep room without warning and there's Haruhi, in the midst of changing. Realizing that he is a she, Ritsu reacts in the only way possible for a mobster's son to react under such pressure: sheer and absolute terror.

"Have a good day at work, Young Lord."

Heading to Ouran with something or someone on his mind.

That someone is Takashi "Mori" Morinozuka.

...will steal your heart.

"I never would have thought that late Edo cosplay would be this popular." 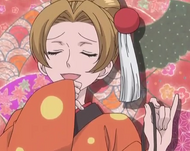 Renge with her fantasies.

"I could eat three bowls of rice!"

Ever watchful is Takashi Morinozuka. 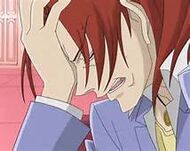 Learning to be a tough guy.

Even the Godfather is scared when Kasanoda struts his stuff.

...makes him appear to be a nice, quiet young gentleman.

"Now that you mention it, Mori-senpai really doesn't do much of anything."

Searching for the culprit.

"You think I dress up like this all the time?!"

Tetsuya assures Kasanoda that his outfit is just fine.

The next day, Kasanoda wonders about Haruhi...

...and finds himself strangely attracted to the Natural Host.

...and definitely confused about his attraction to Haruhi.

A special moment is shared.

"We know that you kidnapped the (gang boss's) kid. Just give him back!"

"We can tell who the bad guys are." 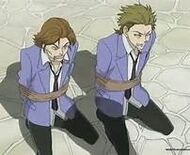 "I'm Tetsuyo Sendo. I'm the son of the Godfather of the Sendo syndicate."

Tetsuya reveals his quarrel with his father and his leaving home, one year ago.

A down and out Tetsuya.

A concerned and kind Kasanoda.

"The reason I left was because...of the likes of you. Now get lost."

A bond is forged and Tetsuyo joins the Kasanoda syndicate.

"I hope, young Lord, that you will allow me to remain by your side."

"Don't...you care that (he's) gone to see Haruhi, who is changing clothes?"

"MAH!"
Add a photo to this gallery

Retrieved from "https://ouran.fandom.com/wiki/Ep_22_-_Mori-senpai_Has_an_Apprentice_Candidate!?oldid=39000"
Community content is available under CC-BY-SA unless otherwise noted.