"Halloween - a day for wearing costumes!"

"Some people cosplay year 'round."

"A test of courage tournament?"

Renge says it will be scary and dark.

While at Host Club...Tamaki may nibble your neck.

Mitsukuni and Takashi are your treats.

You don't want to know what Kyoya is planning.

"Haruhi? You're not going to take part in this, are you?"

Nekozawa adds to the fun.

"Is someone a 'fraidy cat?"

"We're about to choose groups." 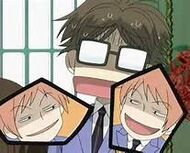 "The point is to scare someone not on your team."

"Our powers are nothing against his wholesomeness!"

Kyoya, enjoying the evening...in his own, inimitable, way.

Up close and personal.

Haruhi carries a sewing kit all the time?

Tamaki worries about his "little girl."

"After all, what's Halloween without a little unadulterated terror?"

Soga's "spell" is simply to be near Kurakano, even if she does like Haruhi.

"Maybe...keeping things the way they are, wouldn't be so bad." 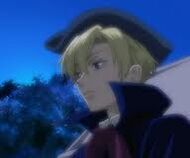 ...,keeping his "family" intact for as long as he can.

When everyone reunites, a shadow appears and...

All of Class 1-A are Captains of All Cowards...

Kurakano thinks Soga incredibly sweet for putting others ahead of himself. 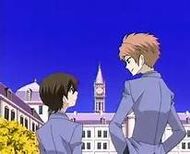 "One day Hikaru will realize he wants to take the next step on his own."

"...I don't know what I'll do."
Add a photo to this gallery
Retrieved from "https://ouran.fandom.com/wiki/Ep_21_-_Until_the_Day_It_Becomes_a_Pumpkin!/Image_Gallery?oldid=38898"
Community content is available under CC-BY-SA unless otherwise noted.