Chika's "Down with Honey" Declaration

Chika's "Down with Honey" Declaration is the 18th episode of the anime series. Yasuchika "Chika" Haninozuka, Honey's younger brother, comes to the Host Club and requests to see his sibling. Upon seeing one another, the brothers break into a martial arts battle. Haruhi learns that they're siblings and though similar in appearance, their personalities are complete opposites. She hears about Honey's past, including his transformation from Captain of Ouran's Karate Club to being the loli-shota gamin of the Host Club. Tamaki's compassion and insatiable urge to meddle shine through once more as he hatches a plan to reconcile the brothers. Will Tamaki's plan succeed?

The episode opens with a middle school boy at the doorway of Music Room #3, asking Haruhi if Honey can meet with him. Mori emerges with Honey on his shoulders, the tall host looking unsettled while Honey cheerily greets the boy as Chika-chan. The boy says, "Prepare yourself, Mitsukuni" and the two launch into combat, much to Haruhi's surprise. Renge rises on her rig, providing a play-by-play description of their battle. Weapons emerge from out of nowhere and Chika slams Honey across the room using a metal pipe, claiming victory until Renge declares Honey the winner, the replay revealing his use of shuriken to shadow stitch Chika into the floor.

Haruhi learns that Chika is Honey younger brother and that the Haninozuka family has its own unique brand of martial arts which they hone by insisting that family members compete any time they meet. He also states that the heart of the Haninozuka technique is self-restraint which, as the twins point out, doesn't seem to apply to the self-indulgent Honey. Chika says that this is why he will never recognize Honey as head of the family and wants him to steer clear of him at school. He departs and Honey is seen staring out the window in a forlorn manner.  Haruhi asks if he's okay and Tamaki asks what they should do with the last piece of cake. Without missing a beat, Honey happily declares, "I'll eat it!" and swings Usa-chan about wildly. Haruhi admits that every family has its issues but she doesn't understand why Honey chose the Host Club over the Karate Club, a much more respectable organization.

The twins share the story of Honey's past when he was Captain of the Karate Club as a 1st-year Ouran Academy student. Flashback to Honey as a 1st-year when, because of his small stature, his father is concerned he won't be respected as the eventual family patriarch and so, instructs his son to cast aside all weakness and take hold of his true strength.  Honey agrees and tries to be a manly man: crating away his toys, adopting a tough attitude and giving up the sweets he loves.

While still Captain, he meets Tamaki Suoh who entices him to join the Host Club by promising the adoration of girls, stuffed animals and all the sweets he wants. Honey tries to resist without success, especially after Tamaki defines "true strength" as completely being yourself. Honey then asks his father the definition the "true strength" which his father attempts demonstrate in the dojo, landing the man in the hospital after Honey soundly beats him in their match. When the Secretary of State to Japan (who is serving as the referee) witnesses this, he begs the boy to never use his martial arts at full capacity in public ever again, worried that the international community would suspect Japan of harboring a weapon of mass destruction. That's when Honey quits the Karate Club and joins the Host Club; and Honey's parents begin to raise Chika in a much stricter manner.  Upon hearng this tale, Tamaki declares "Operation Haninozuka Brothers' Reconciliation" in action. The hosts observe Chika in action through a window at his dojo, where he serves as the current President of the Karate Club. Fawned over by fangirls and obeyed by his students, the younger Haninozuka notices that both groups say that he's good, but not as good as Honey. Chika responds by being rude to the girls and even harsher with his students. When Hikaru and Kaoru see this, they analyze his reactions as evidence of an inferiority complex, something in which they have no interest. They scamper off and as Tamaki yells at them, Honey arrives and says that it's fine; that as long as Chika-chan grows up to be strong and happy, he'll be satisifed.

Chika emerges from the dojo and confronts the group outside, and another family greeting-battle ensues with Chika calling Honey an "alien." When asked why, Chika rants about Honey eating three cakes every night for dessert and even hosting a weekly midnight cakefest. He further reveals that they used to get along until someone "brainwashed" Honey into thinking that true strength was being yourself. The twins openly blame Tamaki for Chika's current woes and Tamaki is mortified and fearful of his physical safety.

Mori finally steps in and says there is a way to resolve their differences. Honey tells everyone that he appreciates Tamaki and the Host Club and that he's going to continue being himself but suggests to his brother that they resolve things like men, in the Haninozuka style. Scene skip to a broad field where the battle commences, playing out the way their previous fight went down in reverse; Honey with the pipe and Chika with the shuriken. Mori discloses that in every fight the two brothers have, Chika uses the techniques that Honey used in the previous match, thereby allowing his brother to practice those techniques.  He adds that a little sibling rivalry is normal, but confidently predicts that Honey will allow Chika to win. The outcome? Honey wins yet again with both Yasuchika and Mori "beaten down," the former physically and the latter emotionally.

The episode concludes with Honey declaring that, as the winner, he's now going to have midnight cakefests three times a week. As the sun sets on Honey and Usa-chan, two philosophies are voiced: Haruhi thinks to herself that Honey is a dreadful person because his love of cake exceeds his love for his brother while Tamaki reminds that true strength means being yourself. Honey sits in contemplation of these two ideas then discards both as he declares to Usa-chan, "I love you!"

"Can you ask [sic] Mitsukuni Haninozuka to meet me out here?"

Referee!Renge covers the action with glee.

A little friendly (or unfriendly) competition.

...but Honey's shuriken have stitched him to the floor.

Recognizing Chika and Honey as brothers.

...who refuses to recognize the loli-shota as the next patriarch of their family.

A sad situation, but nothing that a little cake can't make better.

Haruhi is surprised to learn that Honey left the Karate Club to be in the Host Club.

"Why did you just say the Host Club like that, huh?"

"No matter how you cut it, the Karate Club is a...more reputable club than ours." 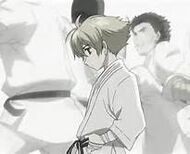 "If you really want to know, we'll have to take a trip down Memory Lane."

Honey knows what's being said about his size...

...so he asks his father for advice.

Instruction? Embrace your inner strength to become a manly man.

Honey boxes away all his cute playthings...

The twins continue to tell Honey's story, concluding with...

"That story is such a tear-jerker."

Then, one day, an invitation arrives.

"I was wondering if you'd like to join a new club I'm starting."

"Don't you think it's about time [sic] to get more out of life?"

Tempting Honey with his favorite things.

Asking for fatherly advice, once more.

"Come with me to the dojo."

Honey is seen as a weapon of mass destruction...

...and possible threat to international relations.

Chika is now captain, but hears his dojo students favoring his brother...

Tamaki is determined to reunite the brothers.

The twins are bored... 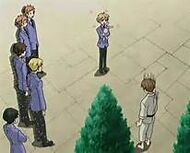 ...until Chika confronts his brother...again.

"I thought I had told you to stay away from me, Mitsukuni."

Chika thinks his brother is an alien because he binges on dessert...

...and hosts weekly cakefests, yet never gains an ounce.

"Usa-chan helped me come up with the idea."

Terrified, beleiving Usa-chan is a communication device to the "mother ship."

And it's all Tamaki's fault. 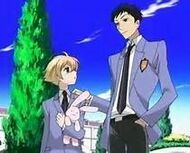 "There is a way to solve this, you know."

"So. Let's settle this like men in the Haninozuka style."

"So what happens if I win?"

"If you win, I'll stop eating cake in the middle of the night."

"He may call him an alien but [sic] Chika has a deep respect for Mitsukuni."

A confident Mori predicts that Honey will let Chika win...

...but Honey is nothing if not a keen competitor.

Mori doesn't know his cousin as well as he thinks he does.

Honey's version of to-be-or-not-to-be comes down to three little words.

"I love you."
Add a photo to this gallery

Retrieved from "https://ouran.fandom.com/wiki/Ep_18_-_Chika%27s_%22Down_with_Honey%22_Declaration!?oldid=38996"
Community content is available under CC-BY-SA unless otherwise noted.