"You guessed it, Kyoya. We're going on a field trip."

"Haruhi won't be joining us...as her presence might harm our credibility."

"Let's dress him to the nines and head to the Expo!"

The Host Club excited among the commoners.

His effect on small children. 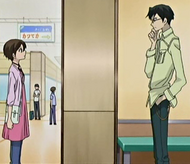 "How much money do you have on you, Haruhi?"

The third Ootori son is clueless in the ways of commoners.

"Be sure to get a receipt. Tamaki will pay you back ten-fold."

A disgruntled Kyoya is "off his game."

"It benefits me nothing to keep up appearances in a place like this."

...though her thoughts are somewhat different.

Haruhi learns about "The Ootori Legacy" and Kyoya's place in it.

The third son is serious, obedient and thoroughly frustrated...

...yet determined to bring merit to his family.

Seeing how it is, she shares her concern; but the "Cool" host avers...

"Oh no, Haruhi. I can think of nothing more fun."

"Why, Madam, you have an astonishing eye."

Artwork from the Shoin Komatsu collection.

"With all due respect, these are fake."

A facade is uncovered.

"For your sake, I hope you have a certificate." 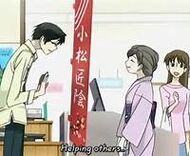 ...and Haruhi begins to suspect Kyoya may possess an altruistic side, after all.

"Her husband is the CEO of a major electronics company."

"Is melon the preferred flavor among snack makers?"

Learning about one another.

Meanwhile, on the rooftop plaza...

Calling for the Host Club Rangers.

Everyone reunites, but Haruhi is exhausted.

"I know you want me to believe that [your motives are selfish]..."

"That's an intriguing notion, in its own way."
Add a photo to this gallery
Retrieved from "https://ouran.fandom.com/wiki/Ep_17_-_Kyoya%27s_Reluctant_Day_Out!/Image_Gallery?oldid=38971"
Community content is available under CC-BY-SA unless otherwise noted.