Big Brother is a Prince!

Sprint
Big Brother is a Prince! is the 11th episode of the anime series. Kirimi Nekozawa, younger sister of Umehito Nekozawa, comes searching for her big brother at Ouran Academy and stumbles onto the Ouran Host Club, where she mistakes Tamaki Suoh for her "handsome princely" brother. The Host Club strives to reconcile Kirimi (who is nyctophobic) with Umehito (who is photophobic) and with some hard-core training from Renge Houshakuji, the siblings are able to confront their fears and share a relationship.

The episode begins with a little blonde girl wandering the Ouran campus. She hears rustling in the bushes and begins to mumble about monsters, adding that her big brother will protect her because he's a brave prince. Upon entering Music Room 3 she sees what she thinks are police officers waiting for her, though it's only the Host Club doing cosplay. After taking in the assemblage of boys and being called "Kitty Cat," the girl suddenly shouts, "It's a reverse harem!"  Though they find it difficult to believe that such a young girl knows the meaning of what she's saying, she seems to possess a good deal of information about the genre.

She focuses on Tamaki and his pale blond hair, then leaps into his arms saying, "My brother's blond; you must be him." The little girl is named Kirimi and though Tamaki tries to correct her mistaken impression, he melts when tears fill her eyes and so agrees to be her big brother from now on. Haruhi Fujioka thinks this is an irresponsible declaration to make, but Tamaki disagrees. Haruhi turns to Kyoya Ootori for a sane response and he suggests they find out if she has a brother at Ouran.

The Nekozawa black doors mysteriously appear and a blond-haired, blue-eyed young man pokes his head into the room, calling Kirimi's name in a familiar voice. Right behind him comes his maid, Kuretake; and his secretary, Kadomatsu, who drape him in the familiar black cloak and wig that identify him as Umehito Nekozawa. The servants warn that their master is sensitive to light and must always wear black, including a wig, or he'll collapse. Meanwhile, mistress Kirimi hates dim places. Haruhi asks if Nekozawa is Kirimi's brother which Kadomatsu tearfully acknowledges and Kuretake calls tragic.

Although Umehito is happy to see his little sister, Kirimi is terrified and jumps back into Tamaki's arms. Haruhi bluntly states that she thinks Kirimi is afraid of Umehito; Kyoya and the twins agree. The twins try to help by attempting to remove his cloak, but Umehito is afraid of the light. Mitsukuni "Honey" Haninozuka suggests darkening the room, but Kirimi is afraid of the dark. Kadomatsu finally says they've come to bring Kirimi back home, but the tyke strenuously objects. Hikaru Hitachiin and Kaoru Hitachiin's queries into the siblings' quirks leads Kuretake to share a dramatic version of the family's background which includes them being cursed members of the Tokarev family, wealthy arms dealers. Though Kirimi has been told that Umehito is her brother, she refuses to believe it. Instead, she insists that her brother be like the princely portrait hanging in the family manse. To comfort her, the servants read her shojo manga and fairy tales with princely characters. Umehito says that he prays daily for Kirimi to turn to the dark side, a notion the twins find backwards. As Kirimi clings to Tamaki, Umehito sadly departs.

Operation Character Reformation is implemented to help Umehito embrace the light. Everyone is skeptical except Tamaki who enlists the expert help of a delighted Renge. The re-training takes place in a darkened science room with Renge having Umehito recite new lines to a teddy bear wearing a blonde wig as if it were Kirimi. Tamaki tells him to speak from his heart which pushes the twins into providing Tamaki with a mannequin of Haruhi dressed in a swimsuit, urging Tamaki to speak from his heart. Haruhi walks in to see Tamaki embracing the mannequin and is decidedly ticked off, especially after reading manga after shoujou manga to Kirimi and learning that they are filled with debauchery, just as Kirimi claims.

Kirimi has followed her and seeing the dark room, begins to cry. Umehito is gripped by brotherly devotion and manages to shine a flashlight in his own face, which causes Tamaki to jump the Tokarev gun and tell Kirimi that the blond boy with his back to them is her real big brother. Unfortunately, when Umehito turns, the flashlight shining into his face from below his chin makes him look scary and Kirimi flees in terror.  Umehito slumps to the floor, defeated. When the twins open the drapes, they see Kirimi in the courtyard staring at a cat, which jars Umehito into action, stating that Kirimi is terrified of cats. Leaping through the window, he runs towards Kirimi who finally recognizes him as the big brother she's always wanted just as Umehito collapses to the ground.

Several days later, Nekozawa visits Music Room #3 dressed in his black cloak and wig. While the twins bemoan the fact, Haruhi thinks their efforts made a difference. She turns out to be correct as the episode concludes with Kirimi in the Nekozawa mansion seeing her cloaked brother at the top of the stairs. Instead of running away from him, she runs towards him and they smile fondly at one another, Kirimi stating that she has a big brother who will protect her.

Looking for her brother...

...and finding the Host Club police. 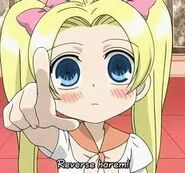