"A one-piece [sic] draws attention to her lacking feminine physique."

"The ruffles help hide the fact that she's so flat-chested."

"Her "alone time" with Tamaki is up. Next lady, please proceed."

"I thought going to the beach meant a day off."

How her guests see her.

Tamaki daydreams about Haruhi and he taking a romantic stroll at sunset. 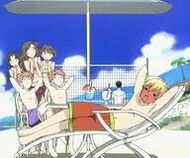 "Senpai, dinner is gonna be awesome!"

Haruhi -- the manliest host of them all -- picking up bugs with her bare hands.

The prize for the host who can discover if Haruhi is afraid of anything.

Tamaki aghast that Kyoya has access to photos of "his little girl."

Haruhi -- unafraid of the supernatural...

Probably unafraid of snakes, too; though Tamaki might be.

"Hey man, there are chicks up here."

Haruhi bravely intercedes, much to the displeasure of the bully...

...who tosses her off the cliff and into the sea.

Her life in his hands.

"Why did you confront them?"

"I don't think I did anything wrong."

"Fine, but I'm not speaking to you until you can admit that you were wrong." 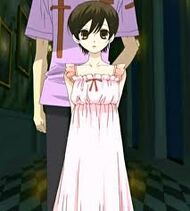 "Don't you think you've had enough?"

"Excuse me? I thought you weren't speaking to me."

"I think you should apologize, 'kay?

"Well, that was a waste of a perfectly good meal." 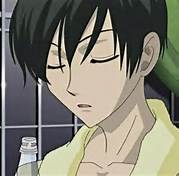 Haruhi finds out how the twins got even...

...and the guests received expensive bouquets.

"Why'd you turn the lights off?"

"If you want to, you can pay for the flowers with your body."

"Surely you don't believe that a person's sex doesn't matter."

"You've left yourself completely defenseless against me."

"I know, because [sic] you wouldn't gain anything from it."

"I know you're just trying to prove Tamaki-sempai's point."

"You're right. You're a fascinating young woman, Haruhi."

"I guess I never realized what a nice guy you are."

"Nothing to be gained, huh?"

"What were you doing?"

Haruhi has business to attend to.

"What business could you have in a wardrobe?!"

"Haruhi, are you afraid of thunder and lightning?"

How she dealt with it then.

"I always get through things like this by myself."

"I'll always be here for you, Haruhi."

"Well, at least know what S&M is."
Add a photo to this gallery
Retrieved from "https://ouran.fandom.com/wiki/Ep_08_-_The_Sun,_the_Sea,_and_the_Host_Club!/Image_Gallery?oldid=38826"
Community content is available under CC-BY-SA unless otherwise noted.