The Twins Fight! is the fifth episode of the anime series. Haruhi Fujioka learns something about the background of the Hitachiin twins who, in an effort to be invited into Haruhi's home, come up with a unique strategy. The President of the Black Magic Club, Umehito Nekozawa, is brought into the cast, along with his cat hand puppet, Beelzenef. The twins get into a huge fight about a whole lot of nothing and drag everyone from the Ouran Host Club into the fray.  It seems that only Haruhi can get them to stop, but how?

The episode begins with a flashback of Hikaru Hitachiin and Kaoru Hitachiin sitting together on a bench in Ouran Academy's elementary playground. A little girl approaches and invites them to make a snowman with her. When they ask,"Which of us is Kaoru and which of us is Hikaru?" the scene jumps to present day. Host Club is in operation and the twins are still playing their game, this time with customers, and still no one can guess correctly.

Haruhi says that it's the dumbest game she's ever heard of and doesn't understand the appeal of twincest. The twins outline the advantages of the club having Hosts who are good-looking with homosexual tendencies, especially since carnal love between brothers is taboo and they struggle between their attraction for each other and their familial bond. Hikaru adds, "Having two loves is better than one, don't you think?"  The guests flutter with excitement.

Tamaki Suoh barges in to complain about the twins' work on the Host Club's website, upset because there's a photo of what seems to be Haruhi with a toned masculine bare back, looking over her shoulder at the camera. Mitsukuni "Honey" Haninozuka compliments Haruhi and the customers gush with enthusiasm. Tamaki wants to know when the photo shoot occurred, his "theater of the mind" imagining them bribing Haruhi with ootoro (fancy tuna) in order to get her to pose for them. Before he completely has a meltdown, they reveal that the photo is a digital manipulation. Though upset, he still asks them to do one just for him of Haruhi in a particular dress. The twins suggest that he just ask her, but when he holds up the dress and asks Haruhi's opinion, she refuses. The onlooking guests agree that seeing Haruhi in a dress would be cute and Haruhi chastises the twins for taking photos without her permission. "Just what do you take me for?" she asks. They reply, "Isn't it obvious? You're our toy." 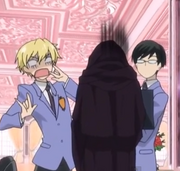 Enter Umehito Nekozawa, President of the Black Magic Club. He invites the twins to come to his club's marketplace to purchase occult toys from around the world. As Haruhi and the twins wonder about the odd student, Kyoya Ootori tells them that Nekozawa-senpai hides in the shadows because he's afraid of light. Tamaki fearfully warns Haruhi not to get involved with him or she'll be cursed. When she asks for evidence, Tamaki regales her with a story of his terror during finals the previous year, when he was transported to another dimension with strange students and a strange exam. Kyoya clarifies that he'd walked into a Beginning Greek class. Tamaki counters by saying that three days later, he woke up with heavy legs. Kyoya again clarifies that he'd just run a marathon the day before. Nekozawa then shows them a "curse doll," explaining that misfortune will come to anyone whose name is inscribed on its back. The twins prank him by shining a flashlight on him and he runs off, screaming.

The twins ask Haruhi if they can visit her home, but she refuses despite their begging. Tamaki joins in, saying it's time he paid his respects to her family, too. The twins suggest that if she loses their who is who "game," her penalty will be their visit. She guesses correctly, saying that although they look alike, their personalities differ with Hikaru being ten percent more mischievous. Kaoru laughs and Hikaru takes offense.  Kaoru asks Hikaru if he's in love with Haruhi and Tamaki flips. The twins begin to argue earnestly.  Renge Houshakuji emerges from the floor on her motorized pedestal for the first time (her running sight gag) to tell them that a four-way love drama makes her feel like eating three bowls of rice (her trademark phrase).  As the brothers' argument escalates to a fight, their guests cheer with glee. Haruhi asks why Renge didn't return to France to which Renge replies that while she considered starting her own host club there, she doesn't think France is ready for it yet. Meanwhile, the twins get so worked up that they declare to one another, "We're over!"

The next day in class, Haruhi sees the twins with new hair colors: Hikaru's is dyed pink and Kaoru's is dyed blue. They continue trading barbs which further escalates into throwing objects (including Honey who happens to be present for some unexplained reason). In the dining hall, they argue about lunch and Haruhi notes that even when fighting, they speak in unison. Honey demands that they make up and share a cupcake with him, which sets him off on a rant about how to share a cupcake three ways, further irritating the twins further and pushing Takashi "Mori" Morinozuka to remove him bodily.  Tamaki asks Haruhi why she's eating in the dining hall, as she usually eats her box lunch at her desk. She tells him that she wanted to see how the twins were getting along, which they aren't. Hikaru sits beside her and offers to trade lunches with her and they do so. Tamaki then tries to trade lunches with Hikaru in order to get Haruhi's homemade lunch, but Hikaru refuses. Kaoru joins them and offers to feed Haruhi some of his lunch off of his fork. Hikaru intervenes, Kaoru throws a dish of food and they're at it, again.

At Club, the Hosts gather without the twins to discuss what's to be done. Honey mentions that this is the first time the twins have ever had a fight which Haruhi finds hard to believe. Tamaki expresses that their fight might be a sign that they're growing more independent of each other. Haruhi somewhat agrees, but is concerned that they may not know when to call it quits.  Hikaru and Kaoru arrive, still arguing. Kaoru pulls out one of Nekozawa's curse dolls, telling Hikaru that he's going to use it to hex Hikaru forever. Tamaki is petrified, but Haruhi jumps between them, demanding they make up or she'll never let them visit her home. Impish smiles emerge on both brothers' faces. It was all a ploy. The twins make up with lots of tears and professions of devotion to one another as Tamaki notes, "Twins with too much time on their hands are the Devil."

The next day, things seem back to normal in Music Room 3, the twins still playing their "game."  With their differing hair colors, the guests think it's a cinch, but they learn that they're still wrong. Haruhi states with assurance that they switched hair colors and the twins regard her, silently stunned at her correct assessment. Kaoru tells Hikaru that up until now, there were only two types of people: Us and Them but now, someone has crossed into their world. That someone is Haruhi Fujioka.

When they were small.

Which one of us is Hikaru?

Can you tell?
Add a photo to this gallery

(To one another) Your momma wears too much makeup!! -Hikaru and Kaoru

(To both twins)  We've had enough of this!  You're both to blame for this fight!  Hika-chan and Kao-chan, I want you to make up and go halfsies on this cake, okay?  But I want to have a piece, too, so I guess we're gonna have to go thirdsies.  We're not going to be able to split the strawberry on top, though.  What should we do?  Maybe I should just take it; after all, strawberries are my favorite.  Oh, I forgot to ask: Hika-chan, Kao-chan, do you like strawberries? -Honey

(To Mitsukuni) You're just making it worse; leave them alone.  - Mori, lifting Honey off the ground.

Retrieved from "https://ouran.fandom.com/wiki/Ep_05_-_The_Twins_Fight!?oldid=41233"
Community content is available under CC-BY-SA unless otherwise noted.