Beware the Physical Exam! is the third episode of the anime series. It's time for the annual Ouran Academy physical exam and the Ouran Host Club is frantic to find a way to keep Haruhi Fujioka's true gender a secret. Even at the exams, the Hosts manage to entertain their guests while Tamaki Suoh poses as Haruhi, unsuccessfully. They meet Doctor Yabu, an odd man and unlikely doctor who has a special story to share leading to the Hosts assisting him in finding his missing daughter. Meanwhile, Haruhi's impression of the club begins to improve, as she gets to know them better.

The episode opens with the Host Club entertaining their guests at an outdoor Garden Tea Party where they are viewed in action: Tamaki shamelessly flirts, the twins demonstrate "brotherly love," Kyoya Ootori sells fanzines and Mitsukuni "Honey" Haninozuka whips matcha into nothingness with Takashi "Mori" Morinozuka gently admonishing. Haruhi is enjoying a quiet moment when Tamaki draws near to ask how she's doing. As he navigates the conversation into a discussion of himself, Haruhi's thoughts deride his narcissism.

Hikaru Hitachiin and Kaoru Hitachiin approach to ask Haruhi what electives she's planning to take next semester, suggesting that they take the same courses since they're in the same class. Tamaki sulks under a tree and Kyoya inquires what’s wrong, calling Tamaki "Daddy" for the first time. Tamaki expresses his irritation with the twins' time-suck on Haruhi's day. Kyoya goes into narration mode, pointing to an out-of-nowhere board comparing the twins' time with Haruhi versus Tamaki's, with Tamaki's share amounting to only three percent of Haruhi's day. Tamaki calls the twins "shady" and demands, yet again, that Haruhi revert to being a girl. The twins point out that this is inevitable now that school physical exams draw near. 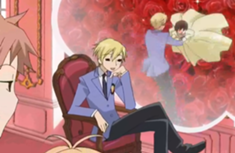 The next day before club, Tamaki daydreams about Haruhi dressed as a girl and they spin about in love-love. Honey and Hikaru cut short his reverie, but Tamaki goes on to "break the fourth wall" (a recurring bit of Ouran business) to elucidate how he and Haruhi are the romantic interests of the anime with the other hosts serving as the "homosexual supporting cast." Honey points out that dressed as a girl, Haruhi will be admired by all of Ouran's male students and Kyoya adds that while in middle school, declarations of love were expressed to her on a monthly basis. Haruhi enters the room and Tamaki announces that "Operation Conceal Haruhi's Gender" is underway. Haruhi's indifference to the plan frustrates the hosts' efforts until Mori suggests fancy tuna as a lure. Haruhi snaps to attention and agrees. 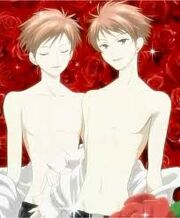 Physical Exam day arrives. While standing next to Haruhi, Kyoya explains that the exams are merely a formality, as the wealthy students all have private doctors. As Haruhi trudges off, grumbling about "damn rich people," a doctor bumps into Kyoya, who suddenly appears concerned. As the girls gawk at the bare-chested Hitachiin twins, Haruhi is rushed into a curtained area by Honey and Mori. There, Tamaki awaits, telling her that he will protect her, going on to portray himself as Haruhi to the waiting nurse and scores of curious girls. The plan backfires, much to the twins' delight at their success in getting even with Tamaki for calling them "homosexual supporting cast." It is at that moment that Kyoya reveals that he's arranged a special clinic with a doctor sworn to secrecy just for Haruhi's exam. The twins grouse that he could have said something earlier, but Kyoya says he needs his revenge, too.

Scene skip to a female student shouting for help after being "accosted" by the doctor who bumped into Kyoya earlier. The hosts learn that the potential pervert is headed towards Haruhi and they jump into action with "1. Good looks that attract the public eye; 2. More wealth than you can imagine; 3. Chivalry that will never be able to overlook the hideous wickedness of this world. That's what makes up the Ouran Host Club." The odd man reveals that he is Doctor Yabu (i.e. Doctor Quack) and runs a small emergency clinic in the next town.

He’s at Ouran searching for his daughter, who was taken away by her mother when she left Doctor Yabu for being overly forgiving of debtor patients to the point of financial ruin. Kyoya states that his daughter may be attending public school because Doctor Yabu can't afford private tuition, but the twins suggest that the real reason is that he's been inattentive. Tamaki demands a map and they give the doctor directions to the public school.

The episode concludes with the twins speculating on whether or not Doctor Yabu's daughter will forgive her father. Tamaki states that it's something he'll have to learn for himself. Haruhi is subtly impressed with their insights, agreeing to stay with the Host Club in order to pay back her debt, and not because of fancy tuna.

Hikaru, more distressed than necessary.
Add a photo to this gallery

Tamaki: This anime is obviously a romantic school comedy. Haruhi and I are the main characters, so that means we are love interests.
Hikaru and Kaoru:  Yeah? Then what are we?
Tamaki: You boys are the homosexual supporting cast!
Hikaru and Kaoru: You gotta be kidding.

Tamaki:  Listen Haruhi, from now on, I want you stop hanging out with those shady twins!
Hikaru: Who are you calling shady?
Kaoru: Take a good look at yourself, Boss!


Hikaru (after Kaoru cuts his finger): Honestly Kaoru, you have to be more careful. From now on, keep your eyes on me. (He kisses Kaoru's fingers.)
Kaoru: Yes, Hikaru.

Retrieved from "https://ouran.fandom.com/wiki/Ep_03_-_Beware_the_Physical_Exam!?oldid=41232"
Community content is available under CC-BY-SA unless otherwise noted.