This is Chapter 12 of the Ouran High School Host Club manga series.

The Hosts have shocked and disgusted faces as they look at the shabby house of the Fujioka family. Haruhi Fujioka, with a dirty face, opens the door for them with a slightly pained expression. Inside, everything is broken. Haruhi prepares tea for them as they sit around a small table. The Hosts look at the tea Haruhi serves in either bowls or cups and Haruhi apologizes for not having tea cups. She then goes to the cupboard to get the “deluxe” sushi she found in a commoner supermarket (which means it isn't really “deluxe”).

Tears emerge in Mitsukuni "Honey" Haninozuka's eyes as he apologizes for coming to her house, as do Tamaki Suoh, Hikaru Hitachiin and Kaoru Hitachiin who also pity Haruhi, plus feel guilty for making her spend money. Haruhi says it’s not a bother and she starts eating. Picking up the ootoro in the "deluxe" sushi package, she remarks that it’s the first time she’s ever tasted it. Tamaki shouts that it's medicore tuna which causes him to awaken from his dream while everyone in the second Suoh mansion wonders what has happened to their young master.

Once Tamaki finally gets up, Antoinette joins him in bed and starts licking Tamaki’s face in her excitement. The noise of the dog can be heard downstairs just as the employees comment how peaceful the morning is. Tamaki comes down downstairs in his uniform and Shima Maezono, the household Chief of Staff for the Suoh second mansion, asks where he's going. Tamaki replies he had a terrible dream and orders Shima to summon the car. Shima informs Tamaki that he hasn't eaten breakfast yet.Tamaki says he doesn't time and must get to school as soon as possible to see if Haruhi is okay. As he's about to exit the house, Shima reminds him that half of his attire is still pajamas.

Tamaki rushes upstairs to change into his full school uniform. Once ready, he tells Shima that he's leaving for real, blushing at his error. Shima then alerts Tamaki that he doesn't have school that day and Tamaki is shocked. Shima adds that if he doesn't have anything else scheduled, he should study etiquette with her. Tamaki quickly remembers he has things to do for the day, ordering a maid to get him a phone. Once in hand, he calls Kyoya Ootori.

Meanwhile, Haruhi is just returning from the supermarket.

She’s happy because there was a sale and she bought all the sale items. She feels satisfied, claiming that going to a supermarket on Sunday is the greatest. Nearing her apartment, she hears loud noises. She walks a few more steps and sees expensive cars and six certain males emerging from fancy automobiles. Haruhi is definitely annoyed that the other members of the Ouran Host Club have arrived without warning. Kaoru comments that Haruhi’s house is pretty big, but Kyoya explains that not all of the apartments are Haruhi's; only one of them is where Haruhi lives. Tamaki complains to Kyoya about the presence of the other Hosts, especially the twins. Kyoya replies that Tamaki told him he didn't have the guts to go to Haruhi's house by himself so he invited the rest of the Host Club. Kyoya says he is mistaken and is about to leave with the rest of the Hosts until Tamaki stops him and says it’s okay for them to be there. People swarm around in front of the building where Haruhi lives chattering about the rich people.

Tamaki then reminds the Hosts to be “nice” and “behave” at the Fujioka house. The twins and Honey enthusiastically agree. Haruhi hears Tamaki and commands them to leave. Tamaki, Honey and the twins compliment her, but she tells them to get lost. The landlady notices Haruhi talking to the boys, so she approaches. Tamaki uses his charm and introduces himself to the landlady as a close friend of Haruhi. The landlady is impressed by this and tells Haruhi and Tamaki to take their time to talk; she’ll bring them cookies later.

Kyoya knows that Haruhi’s apartment number is 203, so he and the others go up followed by Tamaki and Haruhi who were left behind with the landlady. Haruhi complains that they can’t barge into her home because she didn’t even invite them over. Still, she agrees to let them take a look at her apartment for just three seconds. Honey then tells her that he's brought her a cake, forcing Haruhi to let them stay and offer them tea. Haruhi opens the door and reveals the place where she lives.

It is neither dirty nor messy, as Tamaki feared, and he's relieved her home isn't like his dream. Hikaru complains that Haruhi’s house looks poverty-sticken, but Tamaki pinches his cheek and tells him behave. Kyoya states that Haruhi’s apartment looks fine for a commoner dad and daughter. Kaoru adds that the rooms are fine considering Haruhi's size. The twins continue criticizing the apartment, even saying that their garage is better than her apartment. Haruhi thinks they're a couple of brats.

Honey asks Haruhi if they have to take their shoes off. Haruhi says yes, then offers straw boots and slippers she bought at the Flea Market. Tamaki wears the boots Haruhi offers, imagining that Haruhi can’t buy any slippers at all because she’s poor. Tamaki almost sobs at the thought, then heads to the living room. The twins bump their heads into the ceiling before they enter the living room then ask if they should take their slippers since there's a Tatami mat in the living room. Haruhi says yes, then regrets having the Hosts wear slippers because they did not need them for that long and the effort in getting all the straw slippers and boots was unnecessary.

The Hosts explore the Fujioka home, entering and discovering every room as Haruhi narrates a message to her mother: "Dear mother in heaven, good morning. Today the Club’s senpai came for a visit. They're a very rowdy bunch so I was very distracted. There’s a really cute senpai in the Host Club, too.” Next, Honey asks about the bathroom. A few seconds after entering, he emerges screaming and crying. Haruhi continues to narrate: “I don’t know what happened, but the emotion I felt when looking at the crying face was totally an indescribable murderous intent."

In the living room, Haruhi keeps telling herself to be “patient” because she can't expect anything from the Hosts, who are "crouch sitting" in the living room while waiting for Haruhi to prepare tea. The twins call Haruhi and give her tea their dad got from America, suggesting it's perfect with milk, then asking if she has some. Haruhi thanks the twins, then replies that she milk that she bought from the supermarket. Tamaki scolds the twins for embarrassing Haruhi by implying that she's so poor she can’t even buy milk and doesn’t own a teapot.

Haruhi finishes preparing tea. Tamaki continues to talk to the twins and reminds them that their common sense doesn't work in the "commoner" world and one of their "common sense" sentences might hurt Haruhi. He then challenges the twins to a battle, where the loser will be the one who humiliates Haruhi first. Kyoya states that it doesn’t make sense for them to call it a battle, but wishes them good luck. They gather around the table as Haruhi serves the tea, apologizing about the state of the cups. Tamaki feels slightly relieved because the cups Haruhi serves aren't soup bowls like in his nightmare.

Honey asks Haruhi to choose a cake first. Haruhi feels a bit surprised because being given first choice is a rarity for her. Hikaru is about to make a "common sense" comment, but is stopped by Kaoru and Tamaki. Hikaru defends that he was only trying to be considerate. Haruhi tells Honey that she’d like to have the strawberry cake. Tamaki, Hikaru and Kaoru think Haruhi’s reply is cute, but say nothing fearful that their words will hurt her and that they are trapped in the fearsome commoners’ world.

Honey announces that he, Takashi "Mori" Morinozuka and Haruhi are going to have strawberry cakes and the rest of the Hosts can have whatever they want. Haruhi is about to eat her cake when Mori asks if she likes strawberries, then gives her the strawberries from his dish. Haruhi thanks him with a blush. Mori continues giving his strawberries to her while Tamaki, Hikaru and Kaoru sulk about not having the same idea.

After finishing the cakes, Kyoya offers to buy lunch since they came over without letting Haruhi know. Haruhi says she will pay for lunch since she's afraid of the consequences of accepting Kyoya’s offer. Kyoya replies that the money to be spent is from the auction of her notepad and he'll be paying through his credit card. Haruhi relents and let's him pay, since it's her money anyway. Haruhi says they should eat sushi because there’s a sushi shop nearby and she knows the owner.

Tamaki has a terrified look on his face. He writes something on a paper then gives it to Haruhi. Haruhi reads it and finds that Tamaki thinks that the sushi shop is not really deluxe. Haruhi becomes angry and tells Tamaki she knows what deluxe sushi is like, tossing away the paper. The twins laugh in the background.<

Honey requests that Haruhi cook something for them. She agrees, but says it will take a while and needs to return to the supermarket.  The trio scold Honey's bold move, but then get depressed when Haruhi agrees to prepare lunch. Haruhi sighs because she has to go to the supermarket again.  All but Tamaki say they want to go with Haruhi and head outside.

Haruhi wonders where Tamaki is, then finds him staring at a picture of Kotoko Fujioka at her family shrine. Tamaki says he's coming but wants to give greetings to Haruhi’s mother. Tamaki remarks that her mother looks a lot like her. Haruhi says her dad says that she looks a lot like her mother, too, then starts talking about Kotoko and how she used to be a lawyer. Haruhi remembers a flashback of her mother and smiles at the memory. Tamaki blushes looking at Haruhi smiling.

Tamaki invites Haruhi to go now, since the rest of the Hosts are already outside. As he rises from the floor, he slips and falls on top of her. Tamaki apologizes and Haruhi is about to say, “It’s alright” when Ryouji "Ranka" Fujioka appears and sees the compromising scene of Tamaki and Haruhi.

There is a spare space/page in the manga, where a guest draws a comic of the series. Natsuna Kawase provided the comic for the space in this chapter. 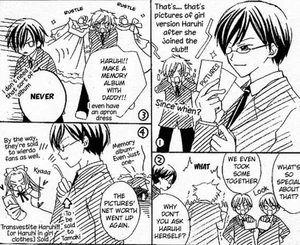 Characters in Order of Appearance