Arai first appears in Ep 15 - The Refreshing Battle in Karuizawa!, as a middle-school friend of Haruhi Fujioka. He's a young man working a summer job in the resort town of Karuizawa as a delivery boy for his uncle's produce store. Through flashbacks and interactions with the Hosts, it is seen that Arai is an intelligent, industrious, thoughtful and tolerant individual.

Not much is known about Arai, not even his first name. When he and Haruhi are in junior high school together, he harbors a secret crush on her and even tries to ask Haruhi out, but she misinterprets his comments and unwittingly rejects him. Haruhi and he meet again in Ep 16 - Operation Haruhi and Hikaru's First Date! when Arai delivers fresh groceries to Pension Misuzu. Seeing one another after over a year has passed, the former classmates enjoy chatting about their old school days. The Ouran Host Club boys gather around to hear about Haruhi's pre-Ouran Academy life and Arai admits that he used to crush on her, leading Hikaru Hitachiin to develop an intense dislike towards him.

Later, while Haruhi and Hikaru are on a date together, the clouds darken and Haruhi becomes worried about thunder. Running into Arai while in town, the boy offers them a lift back to Pension Misuzu, but Hikaru snaps and tears off, with Haruhi chasing after him. Worried about them, Arai contacts Isao Sonoda aka Misuzu a bit later to learn that neither one has returned home. Tamaki Suoh goes off the deep end upon contacting Hikaru and learning that he has abandoned Haruhi in the storm, commands him to locate the girl immediately because of her brontophobia. Hikaru learns a lesson about thinking about the feelings of others and when Arai shows up the following morning with a fresh watermelon to share, Hikaru genuinely makes amends. 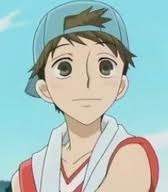 Retrieved from "https://ouran.fandom.com/wiki/Arai?oldid=40727"
Community content is available under CC-BY-SA unless otherwise noted.