Antoiniette and Hachibei are Golden Retrievers appearing in both the anime and the manga. Antoinette is a pup from a litter born to Hachibei, who belongs to Anne-Sophie de Grantaine in France. In the manga, the puppy is presented to Tamaki Suoh when he arrives in Japan as a gift to cheer him up and to keep him company.  In the anime, she's Tamaki's impulse buy while he and the Hosts are visiting a commoner mall in Ep 17 - Kyoya's Reluctant Day Out!  It's no surprise that Bisco Hatori chose the Golden Retriever to be Tamaki's totem animal, as the breed is known to be highly intelligent, sociable, beautiful, and loyal - qualities that describe the Princely Host, as well. 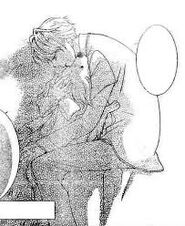 A boy and his dog.

Add a photo to this gallery
Retrieved from "https://ouran.fandom.com/wiki/Antoinette_and_Hachibei?oldid=41371"
Community content is available under CC-BY-SA unless otherwise noted.