Wealthy heiress to the Tonnerre Family.

Éclair Tonnerre is an anime-only character who appears in Ep 25 - The Host Club Declares Dissolution! and Ep 26 - This is Our Ouran Fair!. She is an elite wealthy French heiress to the French company, Grand Tonnerre Group, whose modern-day fortune is based in Finance and Business Management.

Éclair is a slender, pale-skinned young woman with long chestnut-brown hair and vibrant blue eyes. She often carries a pair of opera glasses with purple lenses, which she uses when she wants to see someone more clearly who is far away or when she is speaking with someone nearby, using them as a physical barrier. She always wears "fancy" clothes, even in casual appearances, indicative of her noble birth.

Éclair is a mysterious and strange young woman whose actions are a facade. Her general demeanor is cold, haughty and manipulative. Her behavior is rude towards the Host Club as a lot, especially to Haruhi Fujioka of whom she is jealous. Her age is unspecified.

Éclair comes to Japan to meet Tamaki Suoh after hearing many wonderful stories about him from his mother, Anne-Sophie de Grantaine, a housekeeper in the Tonnerre family's employ.

Tamaki's grandmother, Shizue Suoh, knowing that Éclair and her family has the ability to buy out the Suoh holdings, seeks to align their families by arranging an engagement between the two young heir apparents. Tamaki agrees when he is told he will be allowed to see his mother again if he marries Éclair.

At the conclusion of the anime and in a dramatic turn of events, Éclair releases Tamaki from his obligation because she has come to understand both his heroic nature and his underlying love for Haruhi, who is in danger at that moment. Tamaki thanks Éclair for understanding his choice. Though she thinks him a fool, Éclair's final voiceover notes that Tamaki still smiled for someone like her, thus acknowledging her shortcomings and redeeming herself.

Although Éclair travels to Japan to meet and to bring Tamaki back to France, it's evident that she starts to develop feelings for him. During her time in Japan, she tells him that if he marries her she'll make sure he will be reunited with his mother. While Tamaki considers taking up the option, he isn't fully convinced and asks Éclair if she'll really be happy being married to him. In response, Éclair seduces him. In the end, Tamaki breaks off their engagement to return to Haruhi and the Host Club despite the sure knowledge that in doing so, he may never see his mother again.

Haruhi is the first member of the host club to meet the Lady Éclair. At first, Éclair fails to realize that Haruhi is a girl but is still jealous of Tamaki's affection for her. Haruhi remains courteous throughout her interactions with the wealthy Frenchwoman, but is stunned and upset when she learns that Tamaki and Éclair are to marry. This begins her contemplation of her relationship to the blond and her ultimate decision to chase down the receding car taking Éclair and Tamaki to the airport. She risks her life to reprimand Tamaki for not understanding that everyone loves him and the Host Club (herself included), at which point she tumbles out of the carriage. Tamaki leaves Éclair to save her and return to Ouran.

Anne-Sophie and Éclair have a cordial relationship as Éclair has listened to many stories Anne-Sophie has shared with her about Tamaki's many virtues. Anne-Sophie is a housekeeper at Éclair's home, as revealed in the finale of the anime series. It is never revealed if Anne-Sophie knows of Éclair's plans.

In the manga, Anne-Sophie is a piano teacher and Éclair does not exist. 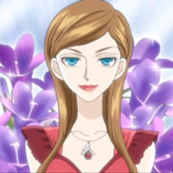 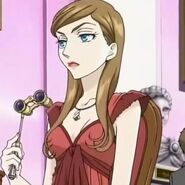 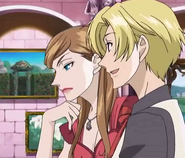 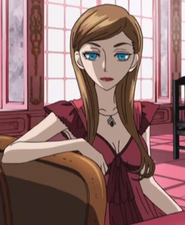 Retrieved from "https://ouran.fandom.com/wiki/%C3%89clair_Tonnerre?oldid=39818"
Community content is available under CC-BY-SA unless otherwise noted.