What's on your mind?

This show makes me so angry I cant even. I think it should be cancelled but honestly you can report me or comment if you think that i'm spreading hate. I just wanted to rant because this made me so angry that I had to turn it off and i'm suprised people like this show. yes I am ranting and that's why i'm posting this, I get mad really easily. ( and because this show is just genuinely wrong)

1. an annoying sexist episode that I expected would be banned by now

Two boys on a trip were threatening to rape some girls girls at the beach, so Haruhi stands up too them and tells them to back off. Apparently standing up to gross people is wrong because Haruhi is just a "weak girl" kyoya threatens to rape Haruhi to teach them a lesson (He didn't actually but it's still bad) and the lesson he was trying to teach them was sexist because they were born female and everyone in this show thinks females shouldn't fight against males because women are weak or something. This is also transphobic because Haruhi identifies as male and they are probably non binary from what I know.

The twins get way too close and say gross stuff to each other even though they are RELATED which is also extremely gross. It's not even brotherly love they actually say sexual things to one another. Even if they weren't twins it's kinda gross because their minors. The only way to make this okay is if they weren't related, they were 18 or older, and they didn't look alike, which wouldn't make sense because their supposed to be high schoolers and their supposed to follow a stereotypical myth that twins can say stuff at the same time without practice. Do fans just watch and think this is okay?? Because the twins are the biggest reason I don't like this show.

3. The height differences are so innacurate its gross

The height differences are disgusting, Haruhi looks like a child and I have a feeling that it's because they were born female. If your sex is a female you don't automatically look like a dwarf while someone born male looks like a giant. Haruhi is literally around half some of the other characters size and no it's not cute because they look like a child. Since the writers are leaning to make them Tamaki's love interest and they look like a toddler it just makes me feel so gross. An average high school boy in japan is 5'6 right? Even if Haruhi was 3 feet tall they wouldn't look like half the size of these males. It would be a different story if their height was caused by a dysability though, but it's not because it's a sexist stereotype. Women are genetically shorter then men but not that short.

4. "This show is so open and accepting to the lgbtq+ community"

If you think this then shut up, honestly. Tamaki made it such a big deal when he found out Haruhi was biologically female and after that he only saw Haruhi as a girl. I know Haruhi doesn't care but I still think this was really wrong. Not only that but the only gay people in this show is the twins which is technically incest and that is like slandering gay people in a way. it's like saying that if your gay you might have a crush on your sibling or friend if they are the same gender which is SO GROSS. I don't remember much from this show because I stopped watching quite early due to annoyance so I don't exactly know if this is the only gay/lesbian couple but if it is then that's just gross. I also heard that they say slurs in the dub which is also BAD. This show is not lgbtq+ friendly and it definitely puts a bad image of gay and trans people in your mind.

I will admit that it's funny to watch them be dramatic about the poor but other then that it's pretty boring. The only emotions I feel watching this show is annoyance and boredom. Sometimes they add random plot lines that don't even concern the main characters which is hard to listen too. Both me and my sister stared off into space multiple times watching this Anime. Tamaki being perverted and sexist when it comes to Haruhi just isn't appealing to humor. This anime has never made me laugh. (This is my opinion though)

PLEASE GIVE ME A REASON THAT'S POLITICALLY CORRECT TO LIKE THIS ANIME PLEASE. I cant stand watching it, I only watched because people say it's not that bad once you get into it. It's so popular and I don't even know why. I think it's just extremely overrated.

I give you free permission to report or comment on why I am wrong. If i got some information wrong correct me, I only watched episode 1 2 3 5 8 and 9 so I am probably wrong. 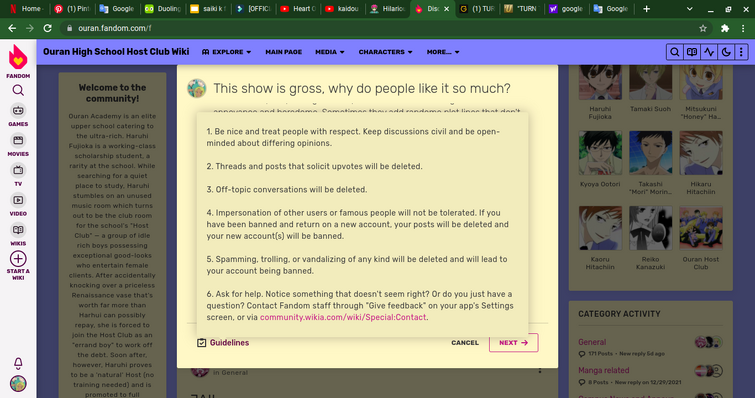 But saying the reasons I don't like this show isn't really in the guidelines so i don't really know why you would report me. I wont be mad if you do report me but I kinda doubt I would be reported because this fandom is kinda dead anyways.

I'm sorry i just finished watching the first season, and THEY NEED JAIL TIME- How could they leave us on a cliffhanger with no season 2 GRRRRRRRRRRRRRRRR JAIL FOR THEM ALL 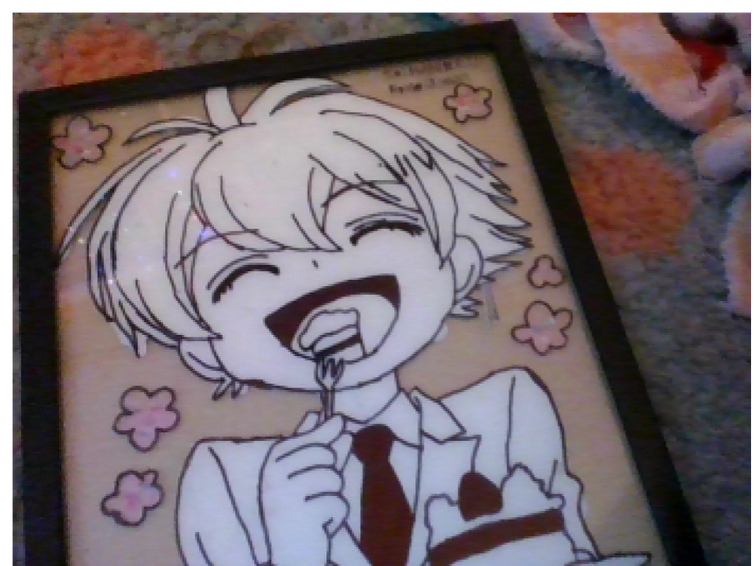 Hello! My pro-nouns are she/her. I recently started watching Ouran Host Club, and I’m almost done with watching it. My favorite characters are the Hitachiin twins.

Merry almost Christmas (if you celebrate it)

If you don’t celebrate it then have a wonderful day!

So the person that was helping me is now inactive. I need someone new to help me. I already have @Miraculousloverrrr helping me but we haven’t came up with other ideas. So I am making this post to see if anyone else with help us make the season 2 script and send it to the directors of ouran host club? 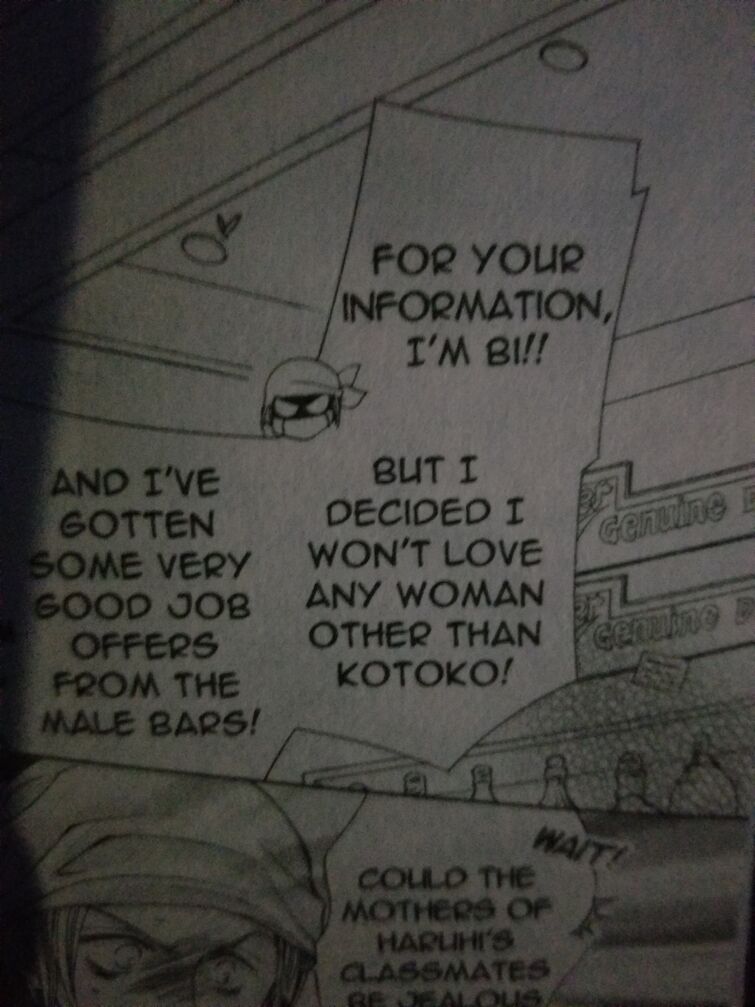 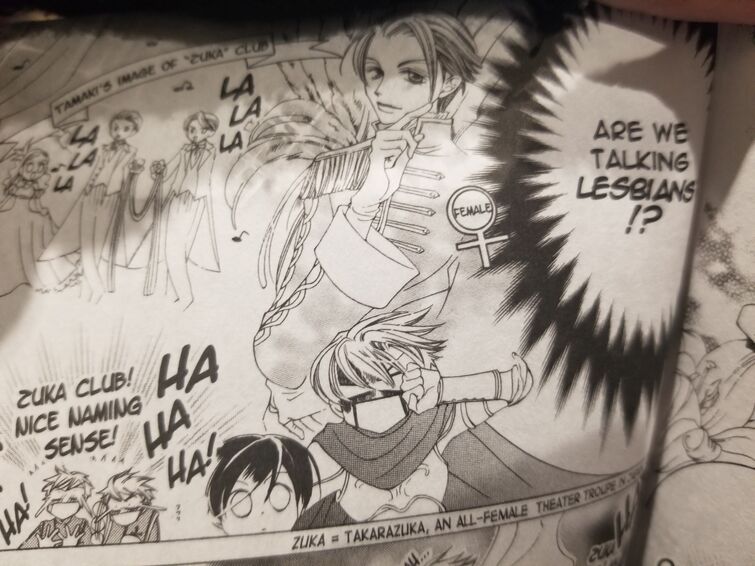 So me and @Benzarro1985 have a idea! We have came up with a idea. We decided to write the script for season 2 and send it to the directors of ouran host club!

Comment if you want to help us with this!

If you are helping pls message me on my wall at 5pm Easter time!

Why is the fandom so deaddddd

Ive recently started watching the show and its cool even tho its a bit problematic i still enjoy it :)

Is this a active wiki?

Disclaimer!: this is not hate for the character this is my opinion about him

I won't say i hate this character but i dislike him he is so weird and is kinda dumb he is cute and all but he acts like a six year old and he just is really annoying.

Honey's character is really bland so are the characters named

( 1.Takashi 2.Kyoya Ootori ) the character's are really bland and make them boring and like a copy and paste as for every other anime male characters

These are the only things i have to say for the character.

Me: minding my own buissnes

Teacher: notices my "which one is hikaru" sticker on my laptop

Teacher: "Which one is Hikaru, the real question is why does it mater?"

Me: trying not to lose my shit laughing

Here's my first edit ever, if you ever want to use it please ask first and give credit....

The mark Luli is my watermark 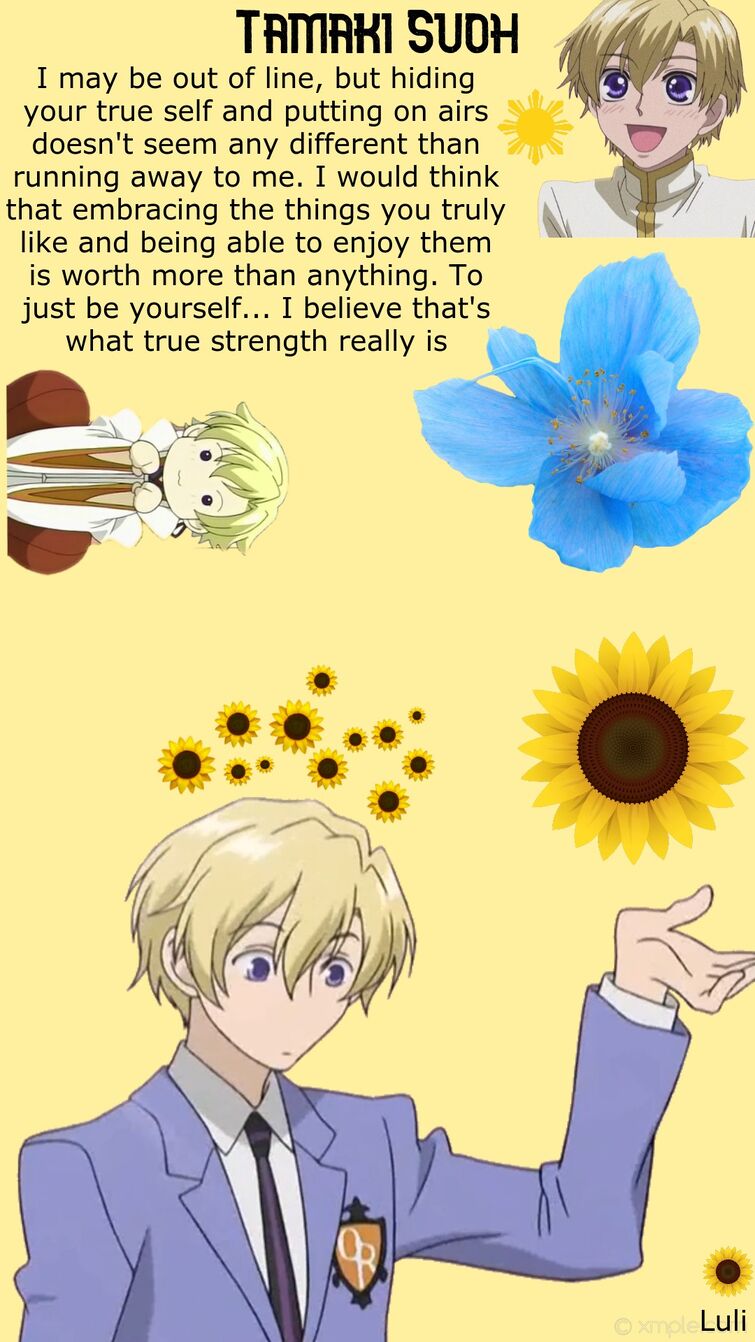 Hello! I'm new and a big fan of this anime! My favorite Characters are a tie between Mori and the twins, although I find all of them amazing!

I saw some news about this on youtube, and people were saying ohshc is gonna have a season 2, even after so many years. I just wanted to ask if this is legit or-

I am new here

I WANT SEASON 2 OF OURAN

I just started reading Ch. 66, and in this chapter and Ch. 65 a "black box" is mentioned in relation to Tamaki, but I don't recall anything from previous chapters explaining what that means. I figured that I forgot, or it hasn't been explained yet, but it seems important to the central story so I really want to know! I googled it but couldn't find anything.

I'm a huge fan of Ouran high school host club but I can't ignore the fact that the show is problematic. Concerning this was made in 2006 I can see why it's problematic. Recently people have been trying to cancel Ouran High school Host Club for saying homophobic ,transphobic and sexist things. I am apart of the LGBTQ+ community and still really enjoy the show. However it does bother me when a host or any character in general makes a comment about one of the things in mentioned previously I still will continue watching it.

The show Ouran high school host club has it problematic moments but nothing compares to the episode called "The sun the sea and the Host club" in my opinion this is the WORST episode in Quran high school host club and is the main reason it's so problematic. I'm not saying this episode is the only reason but most of it. If that episode didn't exist the other Sexist, Homophobic and Transphobic things would be overlooked more.

Do you think Ouran High school host club should remove episode 8 or should someone remake the series the same just less problematic?

Oh and don't get me started on Hikaru and Kaoru there... Intresting to say the least.